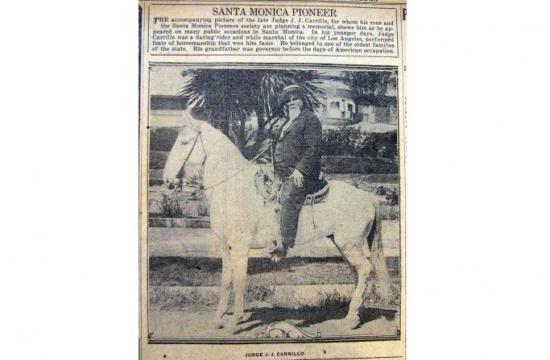 Judge Juan José Carrillo was elected as a Santa Monica Trustee in 1888 and held the position of President of the Board from 1890-1897, and was thus acting Mayor of Santa Monica. He is referred to as Santa Monica Mayor in both historical accounts of the time and in various news sources.

Several news reports at the time verify Carrillo’s position, and the other prominent roles that he held.

“Mr. Carrillo was the first Chief of Police of Los Angeles and the first Mayor of Santa Monica, and also a police judge in the latter city from 1905 to 1915,” according to SFGenealogy quoting from a LA Times obituary published April 1, 1916.

“Juan J. Carrillo, member of one of the early Spanish families in this State, and a prominent figure in the public life of early Southern California, died yesterday afternoon at the residence of his daughter, Mrs. A. H. Calkins, No. 505 West Twenty-eighth street, following an illness from which he had suffered since last October,” the obituary reads.

Referring to a photograph of Carrillo, Santa Monica History Museum states; “The man in the middle is Juan J. Carrillo, first judge, mayor and city trustee of Santa Monica for many years. He did much in the early days to lay the foundation upon which the city of today was developed.”

Carrillo married Francisca Roland (1849–1897) in 1869, and together had eleven children, according to news sources. Carillo’s son was the actor and conservationist Leo Carrillo.

He is interred at Woodlawn Cemetery, Santa Monica.

Carrillo was born Sept. 8, 1842, in Santa Barbara, according to the published obituary. With eighteen other students he went east via Panama to attend Holy Cross College at Worcester, Mass., it states.

“Carrillo’s mother was one of three sisters who made the first American flag in California. He leaves a widow, Mrs. Eva Carrillo, by his second marriage, and four sons and three daughters. The sons are Dr. Y. R. Carrillo of Calexico, E. J. Carrillo, chief engineer of the Shattuck and Eddinger Co.; Leo Carrillo, an actor; Octavius Carrillo, an employee of the Santa Monica post office. The daughters are Mrs. Elizabeth C. Lopez, Mrs. A. H. Calkins and Mrs. Diana (Carrillo?) Hatton,” according to the obit.