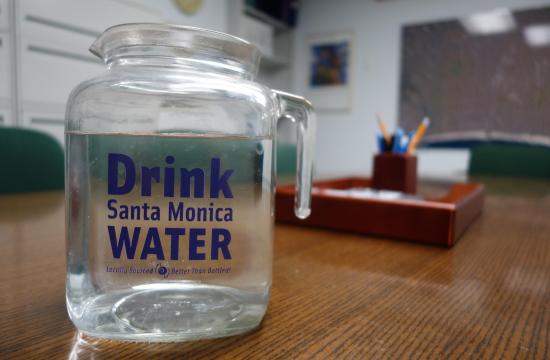 Water is the issue. We are in an extended drought. The City is focused on water. The goals are setting and meeting water conservation standards, creating opportunities for public reuse of stormwater through regulations, incentives, and rebates, meeting the Council mandated requirement for water self-sufficiency by 2020, and water quality.

Many of us learned our Angelino water history from the Jack Nicholson/Faye Dunaway movie “Chinatown.” Water wars, and the taking by force of the Owen’s Valley water to satisfy the water needs of the burgeoning city of Los Angeles are the back-story to the growth of the City of Los Angeles.

Santa Monicans have a different history. In 1917 Santa Monica voted against annexation with Los Angeles even as the City worried about water supplies.

And a very Santa Monica story goes with that vote: “When an Annexation leader claimed he had had no water in his home the opposition arranged for the Fire Department to go to his home and record on camera as the fireman took a 100 foot stream of water from the fire hydrant in front of his house.” (Stella Zadeh)

It didn’t hurt that many Santa Monicans were connected to the new film industry and that they filmed the 100 foot stream of water going from the hydrant to the house as part of the anti-annexation campaign.

It was the 1917 vote that kept Santa Monica an independent city. Now the goal is to achieve water independence.

Currently the City supplies 60 to 65 percent of its own water needs and buys the rest from the Metropolitan Water District (MWD). This is a steadily changing number as the City moves toward the 2020 date for water self-sufficiency.

City water now exceeds the water quality standards set by both the State of California Department of Drinking Water and the Federal EPA. This is due to the fact that, as of 2010, City water is treated by reverse osmosis. Reverse osmosis is a process for cleaning water which forces the water through micron sized pores to capture the smallest molecules of contaminates.

“Water usage in the City is driven by the commercial sector,” said Gil Borboa, Water Resources Manager for the City. “We’re really a small city of fewer than 90,000 residents, but on any given summer day we often have a population of as high as 300,000 people.”

“Every customer, both residential and commercial will be asked to reduce their water usage to 80 percent of what they used in the same month of 2013,” Borbora added.

Water rationing, as some are labeling it, is “really a misnomer,” said Borboa. “What we have is a proposal for a mandatory 20 percent reduction in water use from the base year of 2013. This proposal will go to Council in January and start in April, if approved.”

Residential homeowners who have already changed their gardens to water- conserving gardens and reduced their total water use to 22 HFC (hundred cubic feet) or less per billing cycle will not be required to reduce their usage. Usage information is on the City Utilities bill.

Santa Monica also provides grants, rebates, and incentives to help homeowners convert to water conserving gardens and to the use of cisterns and other stormwater capture and reuse devices (www.smgov.net/water).

“Conservation is only part of the answer,” said Borboa. “We also need to increase our water supply. Most of our current water supply comes from the Charnock wells. About 35 percent is imported Northern CA water bought from MWD.

“We are now pumping 9000 AF. For self-sufficiency we will need an additional 5000 AF of supply and, at the same time, the conservation of 1500 AF. The 5000 AF will come from three new wells, currently proposed for the Olympic median, and the use of the planned conservation measures.”

“If we do both we will be able to meet the total gap between what we use and what we need to be able to supply by 2020.

“Our groundwater assessment for the aquifer which supplies Santa Monica shows 300,000 AF of storage in our basins. Basins are recharged by precipitation and deleted by pumping.

“Santa Monica has gone through a series of droughts in its history and we don’t take our groundwater supplies for granted,” said Borboa.

The City is also considering rate increases and is expected to hear the proposed rate increases this December. “Rate increases are necessary,” said Borboa, “because the Water Resources Agency is funded through the sale of water. We will need to pay for ongoing operations and maintenance; the replacement of infrastructure built over 50 years ago; running our water treatment plant; digging new wells to meet the goal of water self-sufficiency; and running the water quality lab.

“Water rate increases to be heard by the Council are proposed at 9 percent for the first year and 13 percent for each of four subsequent years.”

Santa Monica currently draws its groundwater from the Arcadia, Olympic, and Charnock basins. Basins that the City has traditionally used.

In 1923 the city voted to build the Arcadia plant, to build a five million gallon reservoir at Mount Olivette, and to purchase water-rich land on Charnock Road.

In 1948 Santa Monicans voted to replace the previous mount Olivette reservoir and to fund well construction under the San Vicente median. In 1958 the City voted for a bond to construct a 25 million gallon reservoir at the Riviera Country Club.

“The continuation of groundwater management in conjunction with conservation and stormwater reuse are all necessary to ensure water self-sufficiency,’ said Borboa, “and we’re well on our way.”

I say, conserve water, plant a stormwater garden, be a steward of the environment. Drink Santa Monica Water. Here’s to your health!