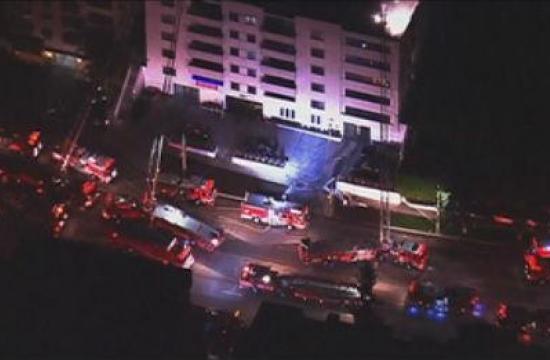 A stubborn electrical fire that burned in the walls of a six-story apartment building in Westwood and sent one person to a hospital also caused $150,000 worth of damage to the structure and its contents, a fire official said today.

The blaze was reported at 8:26 p.m. Saturday at the Wilshire Manor Apartments at 10635 W. Wilshire Blvd., according to Brian Humphrey of the Los Angeles Fire Department.

A total of 130 firefighters responded and knocked down the blaze in 54 minutes, he said, confining the fire to the walls of units 404 and 504 of the six-story, 57-year-old building.

The patient taken to a hospital suffered smoke exposure, but that person’s condition was not immediately available, Humphrey said.

A handful of residents were evacuated from the building but most of the others sheltered in place while accompanied by firefighters, he said.

Six of the building’s 46 units sustained damage and were not inhabitable, he said, adding that an undetermined number of people would be assisted by the Red Cross in finding temporary shelter.

Wilshire Boulevard was closed to traffic between Manning and Westholme avenues during and after the firefight, he said.