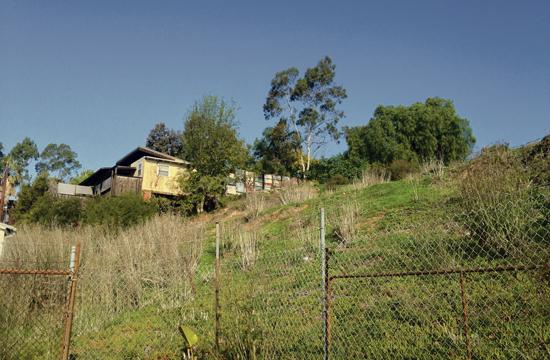 Despite extensive neighborhood protest, a development for 10 residential units at the site of 802 Ashland Avenue, Santa Monica, got the go-ahead Monday, with the design, colors, materials and landscape plans passed by the City’s Architectural Review Board (ARB).

The applicant proposed a new two-story, 10-unit apartment development with one level of subterranean parking providing 20 parking spaces, that was approved during the ARB’s meeting.

The project site is comprised of a 15,257 square-foot vacant flag lot with an existing grade differential of approximately 32 feet.

Active neighborhood voice and opponent to the development, Rachel Kelley, said that the development only passed due to its silver LEED status and the inclusion of one affordable housing unit.

Deeply disappointed by Monday’s decision, Kelley, whose property borders the 802 Ashland site, said that the vocal community of opponents will now re-group before deciding what steps to take next.

Working tirelessly to have the project rejected, Kelley said that she felt the ARB was sympathetic to the neighbors’ plight, but had its hands bound by code.

According to Sunset Park resident Jane Dempsey, after four months and six community/ARB meetings, the project was denied on July 7, 2014 primarily for its mass.

“Instead of appealing it to the Planning Commission, somehow it came back to the ARB with a new architect, who is a former Planning Commission member, and the project looked very much the same in December, 2014 as it did in March. Again, the ARB asked for changes and each time the Santa Monica City Staff continues to recommend approval,” Dempsey said.

“Nothing has been done to protect us,” Kelley added, stating that despite constant letter writing and emails to the City, she received no response.

Friends of Sunset Park president Zina Josephs said that the apartment project is “just too big”.

“802 Ashland is located on a steep undeveloped hillside just above the old Lincoln Pipe building on Lincoln Blvd,” Josephs said. “Normally, only a four-unit apartment building would be allowed on the parcel, but because this is considered a “preferred permitted” project, the developer is being allowed to build 10 units.”

Neighbors also feel that the project did not have a proper California Environmental Quality Act (CEQA) review, as it has claimed an exemption that “does not fit the facts on the ground,” according to Josephs.

Neighbors are also concerned about traffic and parking impacts as Ashland is a very narrow street, it’s already congested, and there is already an acute shortage of on-street parking in the area, she said.

The development will be accessible via a 100-foot-long curving off of Ashland Avenue, just east of Lincoln Blvd, another issue upsetting residents.

Labeling the driveway as the front setback will allow the developer to build closer to both the property lines and the neighbors than would normally be allowed, Josephs said.

While it is described as a two-story project, there will also be two studio apartments on the garage level, so it will actually be a three-story project, surrounded on three sides by single-family homes, she added.

Conceding earlier rejections of the project, according to the City, the new applicant and project architect, Koning Eizenberg Architecture, proposes a design with a Contemporary architectural style with details, forms and materials that are reflective of the style.

“Staff feels that the applicant has responded to the Board’s comments and concerns and recommends approval based on the findings and conditions included in this report,” according to a City staff report.

The project is expressive of a contemporary architectural design and displays forms, materials and functionality that accentuate the concept, according to the City. Specifically, the building features light grey, smooth steel troweled, cement plaster walls that are accented with textured elements such as weathered cedar boards and metal mesh awnings.

Each building exhibits a varied composition of windows and sliding doors that relate to the programming of the residential spaces and expresses an interesting and distinct fenestration pattern for each elevation. The buildings cement, wood and metal materials are complemented with a warm accent colors (orange-red) applied to entry doors and patio door sashes.