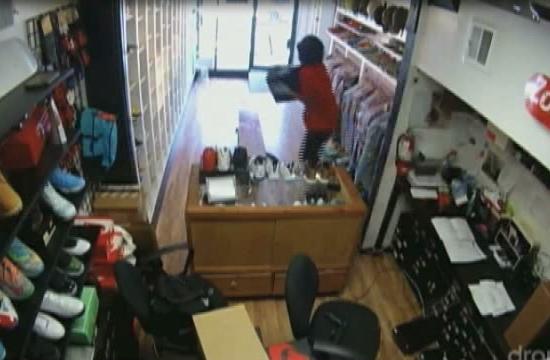 Two gunmen, one wearing a monkey mask and the other wearing a gorilla mask, robbed a Fairfax district store of numerous pairs of Nike Jordan shoes for women on Thursday, police said.

The suspects, each armed with handguns, entered the store in the 7800 block of Melrose Avenue, near Fairfax Avenue, about 12:50 p.m. and threatened a clerk before fleeing in a later-model gray Nissan Altima four-door with paper plates, according to Los Angeles police.

Both suspects were described as as black or Latino, 18-25 years old, 5 feet 7 inches to 5 feet 9 inches tall and weighing 150 to 160 pounds. One wore a monkey mask, gray shirt and blue jeans, while the other wore a gorilla mask, red shirt and blue jeans. Both wore white blue gloves.

Anyone with information about the robbery was urged to contact Detective S. Loera of the LAPD’s Wilshire Station at (213) 922-8216. After-hours calls can be directed to (877) LAPD-24-7 and anonymous tips can be provided by calling Crime Stoppers at (800) 222-TIPS.