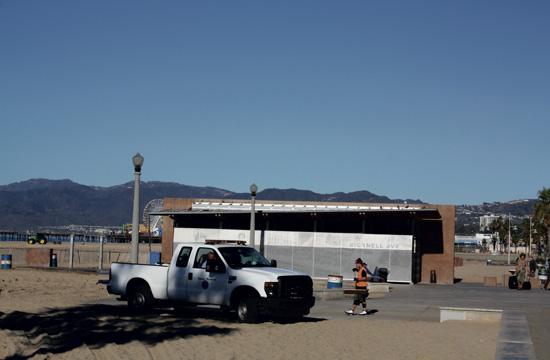 With the City of Santa Monica moving towards eliminating contract and as-needed workers, nine custodial beach workers have banded together in an attempt to secure their positions and livelihoods.

Rallying outside Santa Monica City Hall prior to Tuesday’s Jan. 13 council meeting, the Santa Monica beach workers, joining the Industrial Workers of the World (IWW), called for recognition of their services. Some have been working in an “as needed” capacity for 28 years.

The group was pushing for permanent status for all nine workers and waited until late in the evening to hear City Council respond to a staff report regarding outsourcing and projected hiring trends.

The beach custodial workers are key to maintaining the beach that is the center of Santa Monica’s identity and economy, according to the IWW.

“Implementing changes simultaneously and within a short period of time would increase the City’s overall budget by $1.8 million in year one,” City staff stated.

There are currently 600 as-needed workers in the city, a contracted report finding that many of them do not fall under the official “as-needed” classification.

Discussion regarding the City’s as-needed workers follows a Council request from Aug. 26, 2014, for City staff to perform a comprehensive study of the City’s contractual services, including an evaluation of the number of contracted employees and as-needed staff currently performing services for the City, and options to convert these jobs into permanent full time City positions.

Staff reviewed all possible as-needed conversions, and analyzed each position against criteria

“Staff found that 47 percent of the total identified as-needed hours did not fit these criteria. They recommended converting these hours to 25.65 full time equivalent staff or 30 positions: 14.0 full time and 16.0 part time. This change would impact 40-50 current as-needed employees filling these hours,” according to the City.

A decision was made during Tuesday’s council session to direct City staff to introduce a special classification for the beach workers, as their current roles and duties do not fall inline with current civic service permanent classifications.

Listening to 32 speakers on the issue, including many of the beach workers themselves, council members quizzed the City’s Human Resource Director Donna Peter about how the City could incorporate the beach workers as permanent employees.

A prominent face on Santa Monica’s beaches, Shyolanda Montana told City Council that she is supporting her mother and two sisters with her as-needed wage, and works a second job to make up for the benefits that she doesn’t receive.

“I love my job even though I commute an hour to work everyday just to make rent for my mom and I,” Montanta said. “On top of the 40 hours I put in each week to keep the beach safe and clean, I work a second job to make up for the benefits that I don’t receive. I’m definitely not the only beach worker that does this.”

However, becoming a permanent employee of the City of Santa Monica is not as easy as it might seem, attendees to Tuesday night’s meeting were informed.

As the City has strict civic service rules and regulations, all permanent positions must be created in an equal fashion, to ensure fair recruitment for all, Peter explained.

When questioned by Councilwoman Sue Himmelrich on whether the beach workers’ continual employment and their obvious success in performing tasks as required could counter such a recruitment process, Peter replied that they would all be subject to some type of test and go through an official application process.

The Human Resources Director also explained that her department would assist all of the current workers on methods of application and that her staff would design a special category of employment with requirements that fall in line with the current workers’ skills and experience.

Peters emphasized that while she can guarantee the creation of such permanent positions, she can give no guarantee that the current as-needed beach workers would be successful in obtaining the roles.

A motion to move City Staff recommendations, including the creation of a special classification for the beach workers, was made by Councilwoman Gleam Davis, seconded by Councilwoman Pam O’Connor, and passed by Council unanimously.

• Do you have a story idea or news tip? Contact Jennifer Eden by email at Jennifer@smmirror.com.