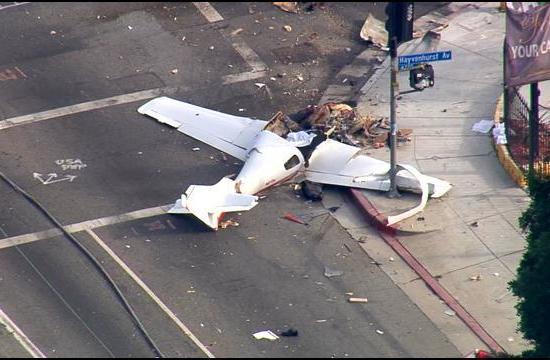 The man, identified by the coroner’s office as 47-year-old Alberto Enrique Behar of Scottsdale, Arizona, died at the scene of the crash that occurred shortly after 1 p.m. at Hayvenhurst Avenue and Vanowen Street, according to the Los Angeles Fire Department.

No one else was aboard the aircraft.

Behar was a research professor at Arizona State University’s School of Earth and Space Exploration.

Before becoming a professor, Behar worked at the Jet Propulsion Laboratory for 18 years, operating, designing, building, testing and deploying scientific instruments and robotics in such extreme environments as Antarctica, Greenland and the Mojave Desert, according to biographical information provided by Arizona State University.

The circumstances of the crash were under investigation by the FAA and National Transportation Safety Board.

The intersection where the plane went down was closed after the crash and Metro reported buses on Line 165 were detoured from Vanowen Street to Victory Boulevard between Woodley Avenue and Balboa Boulevard.

The runway at Van Nuys Airport was inspected following the crash and declared operational, according to spokeswoman Mary Grady.

Los Angeles police Sgt. Barry Montgomery said it was fortunate that no one was injured on the ground on a busy Friday afternoon in the San Fernando Valley.

“I think the citizens in this area were really very fortunate… that this wasn’t a more tragic incident,” Montgomery said.