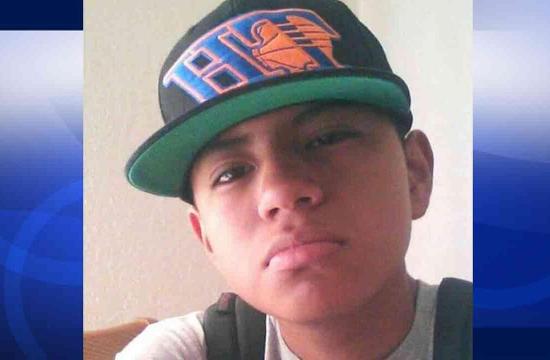 At approximately 1:30 a.m., investigators arrested the teenager at his home in Los Angeles. He was taken to the sheriff’s East Los Angeles Station and booked for suspicion of murder, said Deputy Guillermina Saldana of the Sheriff’s Headquarters Bureau.

The alleged murderer’s name was not released. The victim’s name has not been released by the coroner, but family members have told reporters he was Steven Cruz, a student at nearby Garfield High School.

Firefighters responded at 3:08 p.m. Friday to a report of a stabbing victim on the steps at Griffith Middle School and took the youth to County-USC Medical Center, a Los Angeles County Fire Department dispatcher said.

Cruz was stabbed by another boy as he stood on the perimeter of school grounds immediately after classes let out for the day.

Cruz was walking home when he stopped by the middle school to see friends. The suspect, a gang member, asked Cruz where he was from, a common tactic by gang members to determine gang affiliation, then stabbed him in the torso.

Cruz was described by his friends and family as a good student who enjoyed skateboarding.

Griffith Middle School parents were notified of the death by a recorded audio message, Carazo said.

The school was locked down after the stabbing, and kids were released to their parents in the auditorium.