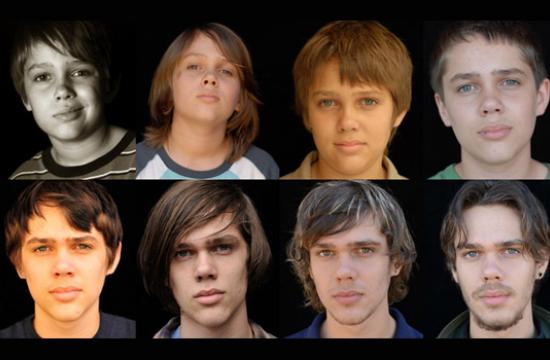 “Boyhood,” the groundbreaking family drama filmed over the course of 12 years with the same cast, was the big winner tonight at the 72nd annual Golden Globe Awards, winning prizes for best drama film, best director and supporting actress for Patricia Arquette.

Richard Linklater, who took home best-director honors for “Boyhood,” said the film was a personal journey for him, and “it became very personal to everyone who worked on it.”

“It means so much to us that people have seen it and responded to it in that personal way,” he told the crowd at the Beverly Hilton hotel. “… Bottom line is, we’re all flawed in this world. No one’s perfect. And I just want to dedicate this to my parents, who gave so much love and support, and I want to dedicate this to parents that are evolving everywhere and families that are just passing through this world and doing their best.”

Julianne Moore was named best actress in a drama for “Still Alice,” in which she plays a linguistics professor diagnosed with Alzheimer’s disease. Eddie Redmayne was named best drama actor for his role as physicist Stephen Hawking in “The Theory of Everything.”

“Getting to spend time with Stephen Hawking, who despite all of the obstacles put in his way has lived  passionately and fully and with great humor, was one of the great, great honors of my life,” Redmayne said.

Keaton, who played a washed-up actor trying to revive his career on Broadway in “Birdman,” hailed director Alejandro Gonzalez Inarritu, saying, “There’s not a person in this room who won’t show up for your next gig, my brother. I’m telling you, just name the place, you name the time.”

“Thanks for being a true artist,” he said. “Thanks for letting me be part of this unbelievably gutsy unapologetic look at human nature. Thanks, it’s been a ride.”

He went on to thank his family and friends, but with his voice cracking, he added, “My best friend is kind, intelligent, funny, talented, considerate, thoughtful — did I say kind? He also happens to be my son, Sean. I love you with all my heart buddy.”

Amy Adams was named best actress in a comedy/musical for her role as artist Margaret Keane in “Big Eyes.” She won in the same category last year for “American Hustle.”

J.K. Simmons was named best supporting actor for his role as a fearsome jazz instructor in “Whiplash.” The win was his first career Golden Globe.

Patricia Arquette took home the Globe for best supporting actress for her role as a struggling mother in “Boyhood.” She praised Linklater for “allowing me to be part of something so human, so simple and groundbreaking and significant in the history of cinema.”

She said she was honored to play “an under-appreciated single mother” in the film.

“Thank you for shining a light on this woman and the millions of women like her, and for allowing me to honor my own mother with this beautiful character,” she said.

Common and John Legend won the prize for best original song for “Glory” from the civil-rights-era film “Glory,” while the Globe for best animated film went to “How to Train Your Dragon 2” and the Russian film “Leviathan” won best foreign-language film.

Since the Hollywood Foreign Press Association adopted the split drama/comedy-musical format for the Golden Globes in 1963, 67 percent of the films that ended up with best picture Academy Awards had first received a Golden Globe.

The Golden Globe drama winner has gone on to win best picture 27 of 51 times — 53 percent — including last year’s winner, “12 Years A Slave.” The musical or comedy winner has won seven times at the Oscars, including each of the first three years.

“These days you get in a lot of trouble no matter what you say,” he said in accepting the award with a smile. “… I know this for a fact. So I’m just going to say thank you.”

Maggie Gyllenhaal won for best actress in a miniseries or TV movie for Sundance’s “The Honourable Woman.” It was her first career Globe.

Amazon streaming video’s “Transparent,” about a family coping with the discovery that their father —  played by Jeffrey Tambor — is transgender, was named best comedy, topping a category that left out traditional powerhouses such as “Modern Family” and “The Big Bang Theory.”

Another small-screen newcomer, Showtime’s “The Affair,” was named best television drama, and its star, Ruth Wilson, was named best actress in a drama.

“This is just the beginning of my revenge,” he joked — and he later dropped a profanity, earning him a short censoring by NBC.

Spacey recounted a conversation he once had with filmmaker Stanley Kramer, who told him that despite his success, “I just wish my films could have been better.”

“I just want to be better,” Spacey said, “but this is very encouraging.”

Tambor was named best actor in a comedy series for his role as a transgender woman in “Transparent.” It was his first career Globe.

“Thank you to the Hollywood Foreign Press for putting us on the map and making people aware of our story,” he said.

He dedicated his award to the transgender community.

Gina Rodriguez, 30, won the Globe for best actress in a television comedy for “Jane the Virgin,” playing a young woman who finds out she is pregnant, despite never having sex.