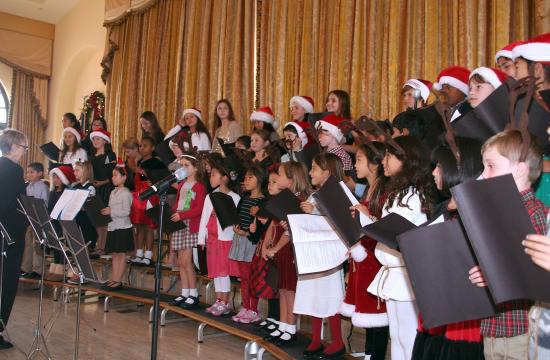 The final Santa Monica Rotary Club meeting of 2014 was held Dec. 19 in a fittingly festive manner, with the usual business-related matters fading out to highlight some special guest performers.

After grants were given to Meals on Wheels West and the Hearing Loss Association of America, the children’s choir from Carlthorp School, a Santa Monica-based private primary school, graced the Rotary meeting ready to spread cheer through song.

The meeting was adorned with holiday décor, from reindeer centerpieces to chocolates and candies scattered all over the round tables.

For those wanting to add a little more fun to their communal meal, a sheet with instructions to a Dreidel game was placed at every table for members to participate in together as they dined.

As the afternoon continued, a group of about 45 elementary-aged students from Carlthorp School took center stage.

Comprised of children as young as first-graders, the choir represented a range of grade levels, and likewise performed a variety of holiday music for its audience. From Hanukkah songs to Christmas music, the children performed about 15 holiday-themed tunes.

Although the majority of the songs were crooned as a collective group, some students grouped off into smaller ensembles to put a twist on the variety of performances.

Several girls teamed up with their friends to sing ballads while a quintet of boys entertainingly rapped to “Santa Claus is Coming to Town.”

The entire chorus partook in both traditional Christmas carols like “Joy to the World” in addition to more humorous songs like a goofy Christmas version of the “Hokey Pokey,” complete with choreography.

The show concluded with the classic “We Wish You a Merry Christmas,” which was complimented by a medley of jingle bells played by the older students.

The children proved their sprouting abilities to take initiative as they coordinated their own introductions and transitions in between songs.

At the same time, the kids stood as a reminder of innocence and simplicity as they cheerfully donned smiles and Santa hats throughout the entirety of their performance.

To wrap the weekly meeting up, Santa Claus made an appearance at the Rotary meeting, offering hugs and gifts to some of the children seated with the members.