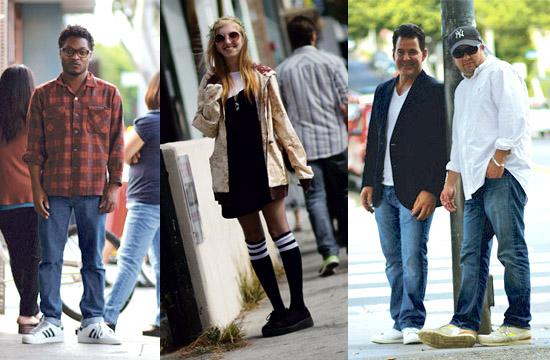 We can all relax now, because the results are in: Santa Monica is the best-dressed “suburb” in America. Whew! Yes, it was close there for a while when it was announced that Mukwonago, Wisconsin was “The Culottes Capital of the Midwest” and then there was that kerfuffle concerning bib overalls and whether they had to necessarily be “paint and dirt-free” to qualify as sportswear, but we came out victorious.

In the preceding paragraph, nothing is true except for the very first statement. Santa Monica has, in fact, been crowned the best-dressed suburb in America by something called the Movoto Blog which says it covers the “Lighter Side of Real Estate.” So, when you’re looking for a chuckle over mold, termites, or whether your home will remain standing after an earthquake…

This new dubious distinction was arrived at by arguably lazy metrics: Movoto Blog added up all the retail clothing places in our city and discovered that we had the best store-to-citizen ratios.

But let Clark Teft, who works for Movato Blog not as a writer but rather as a “content creator,” breathlessly tell you himself: “The all-important Best Dressed Suburb 2015 award proudly goes to Santa Monica. It wasn’t even that close as Santa Monica took the gold medal in not one, not two, but three of our Best Dressed Categories. And that’s not just taking first place out of the top ten, that’s first place out of all 140 suburbs across the country that we looked at. Our top hats off to you. Santa Monica has a clothing store for every 1,246 people, a shoe store for every 5,279 people, a jewelry store for every 5,279 people, and dry cleaner for every 1,282 people. Three perfect place scores. That’s a lot of high-end shopping. In all our dressing needs, we envy you Santa Monica.”

While possibly presented tongue in cheek, the assumptions come fast and loose. There’s the notion that because high-end merchandise is available people are buying and wearing it here. Tourists might be taking it home, while the actual denizens of Santa Monica pedal their bikes to Whole Foods wearing a Foo Fighters t-shirt from 1997. Or this Movato Blog “content” reveals what nobody in Santa Monica dares to whisper lest they upset a developer or a City Council looking for tax base: That we are possibly over-built with retail.

An oft-repeated modus operandi for developers hoping to fill up our skies with higher and higher buildings has been to point eyes downward toward the street and talk about the dynamic retail spaces that are going to shimmer at the base of their proposed contribution to our citadel. The Mirror reported that “Black Friday” sales before Christmas were strong in our city. But because I’m taking a class downtown on week day evenings in January, I’ve had an after-holiday chance to peer into retail spaces and check out the action. And with the possible exception of the Apple store it always looks like it would be great if the boss would let the clerks read a book during evening hours. Did I say just “clerks”? I meant “Best Dressed Clerks Waiting for Best Dressed Customers.”

As in my previous column where we discussed the availability of foie gras in our city’s restaurants, Santa Monica accepts that it is a first-world city and that there are going to be things that go along with that. People wearing great, stylish, expensive clothing would be one of those things. I personally find it needlessly painful when young people are put in a social vise of having to wear known brands to find acceptance into the hierarchy of peers and friends. When I was a kid my jeans were from Sears, and you could buy a pair and then watch your parents pick out a Kenmore washing machine. I’m saying that if you want to talk about fashion, I’m probably not your guy.

But I don’t really want Santa Monica to win any more awards for our clothing or the price point of our automobiles or the fevered jacking-up of home prices. And I suspect you don’t either. Let’s not find out we are number one in bars and restaurants where the price of a beer is always in double digits. Let’s not go to our online news sources and read that we are the city with the most expensive movie theater tickets and priciest bag of popcorn. Just because the world is hurtling toward potentially destabilizing class divisions, let’s not revel in warning signs that we are hurtling along with it… even when they are as pitifully slight as this recent nod to our threads.

I’d rather gather up some first-place honors for use of alternative energy, structures where the homeless can seek shelter, excellence in education, sustainable growth and development, access to public transportation, public safety, utilization of the talent and skills of our senior citizens – you know, that kind of stuff. Like the way we all feel better about ourselves when the water at the beaches tests clean. Because besides our clothes those things look good on us, too.