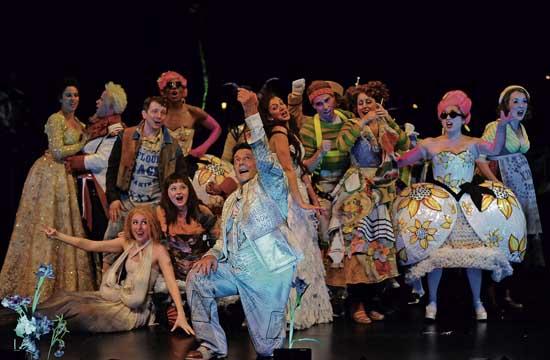 The Oregon Shakespeare Festival’s production of “Into the Woods,” which just closed after a successful run at the Wallis Annenberg Center for the Performing Arts, was an exciting theatrical gift.

With music and lyrics by Stephen Sondheim and book by James Lapine, under the superb direction of Amanda Dehnert, the story is the most original retelling of the famous The Brothers Grimm fairy tales you’re apt to see anywhere.

The play could easily be named “Fractured Fairy Tales,” as Lapine’s brilliant book seamlessly integrates iconic characters from “Little Red Riding Hood,” “Jack in the Beanstalk,” “Cinderella,” and “Rapunzel,” all brought to life by Sondheim’s challenging, but compelling score.

The underlying message is be careful what you wish for, as it might not be as wonderful as you think. At the same time, it poses the questions of “does the ends justify the means?” and “what are the consequences of pursuing a non-noble path?”

Briefly, the story line revolves around the baker (Jeff Skowron) and his barren wife (Rachael Warren). They desperately want a child and soon find out from the wicked witch (Miriam A. Laube) that she had placed a curse on their family because the baker’s father stole precious greens from her garden. The only way the curse can be erased is for the baker and his wife to bring her a red cape, golden slippers, a cow white as snow, magic beans, and something bright yellow.

The play began with the actors and musicians appearing on stage, milling around in street clothes and in short order broke into “Prologue: Into the Woods,” the first of twenty-three of Sondheim’s signature songs. The narrator (John Vickery) conducted a running commentary as the various delicious scenes unfolded.

The baker and his wife are busy in their shop when in comes Little Red Riding Hood, (Kjerstine Rose Anderson) wearing her famous cape, which doesn’t escape the baker’s eye. The little girl is on her way to grandmother’s house and fills her basket with goodies to take give to her granny. She chooses breads and cakes, stuffing her mouth with the contents of her basket, carefully avoiding paying for the sweets. Later on, the baker tries to seize Red Riding Hood’s cape, but her screams are so loud, that he returns one of the items he desperately needs to dispel the curse. But don’t stress: this requirement might be met later in the woods.

We now meet Jack (Miles Fletcher) and his mother (Robin Goodrin Nordi) who instructs him to sell their cow, Milky White, as they have no money for food. A delightful Catherine E. Coulson plays the cow and conveys volumes without a single line of dialogue. Jack sings “I Guess This Is Goodbye” to his beloved cow.

So, quite reluctantly, Jack goes into the woods where he comes upon the baker and his wife who are in search of the needed items. Eyeing the milky white cow, the baker seizes the opportunity to buy the cow but alas, has no money. However, he offers Jack the magic beans and quickly makes off with the first of the requisite items to dispel the curse. The baker’s wife, feeling guilty about the beans that might not be magical, sings “Maybe They’re Magic.”

Meanwhile, Little Red Riding Hood is sauntering through the woods and it will not surprise you to find out that she meets the big bad wolf (Howie Seago). She is fearless and dismisses him out of hand, continuing her journey to grandmother’s house but not before they sing “Hello, Little Girl.”

Our next fairy tale character to appear is poor Cinderella. There she is, once again, scullery maid to her stepmother (Catherine E. Coulson) and two obnoxious sisters, Florinda and Lucinda, (Katie Bradley, Christina Clark). They are preparing themselves to attend the Prince’s (Jeremy Peter Johnson) festival and assure Cinderella that she would be out of place.

But, as you probably know, her wish to attend the festivities comes true and she receives her beautiful gown in a most unusual way. Yes, she’s got the golden slippers too and as we expect, at the stroke of midnight, she dashes away. She repeats this scenario several times until, at last, she loses one of her golden slippers and the smitten Prince’s hunt commences to find the foot that fits the slipper.

Continuing along the intersecting fairy tales, we hear a beautiful voice off in the distance. Rapunzel (Royer Bockus) sits by the window of her door-less tower and sings a beautiful song, which captures the ear of yet another prince (John Tufts). He immediately falls in love and watches as the Witch, Rapunzel’s mother, asks her to “let down her golden hair” and up she climbs to reach her daughter, where they sing a beautiful duet, “Our Little World.” Mmm. Something golden.

We now have two princes in love – one with Rapunzel and one with Cinderella. The love-sick princes sing “Agony,” which basically talks about their love and their inability to be with their respective beautiful girls. It should be noted that these are not your typical princes who come charging in on white horses. These particular princes ride around on a tricycle with a horse’s head on the front and their characterizations are played very broadly and quite amusing, almost like the “Dudley Do-Right” character made famous on “The Rocky and Bullwinkle Show.”

The high jinx action continued throughout this delicious two-act play, with more haunting songs including, “I Know Things Now,” sung by Little Red Riding Hood, “Lament,” sung by the Witch, “Any Moment,” sung by Cinderella’s Prince and the baker’s wife, a most moving “No One Is Alone,” sung by Cinderella, Little Red Riding Hood and Jack. The memorable closing number “Children Will Listen” is sung by the Witch and the entire company.

As a result of the intersection of these memorable fairy tale characters, the baker secures the needed objects to remove the curse, dreams come true, disappointments abound, and surprising decisions are made, illustrating that wish fulfillment is not all it’s cracked up to be.

Director Dehnert assembled a gifted, most professional ensemble, all of whom possess powerful Broadway-caliber legit voices, supported by their excellent acting skills, much like the cast in the original production, which premiered in New York at the Martin Beck Theatre on November 5, 1987.

Laughs abounded in this delicious morsel of a play contrasted by sad moments but all together it spelled a special theatrical experience. For those of you who missed “Into The Woods,” hopefully the Wallis will bring it back same time next year.