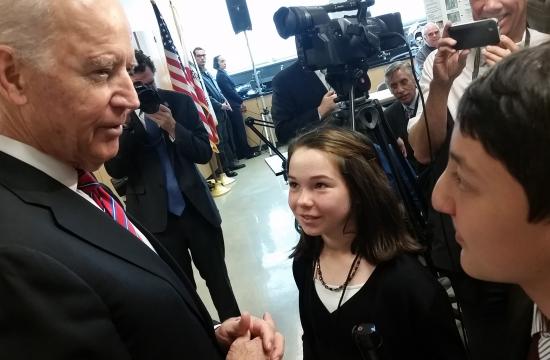 Vice President Joe Biden met with students and administrators at West Los Angeles College today, touting a presidential proposal to provide two free years of community college by preaching that 12 years of free education is not enough for America in 2015.

“We have a gigantic opportunity to do a great service not only to our children and our young people and people who need to be retrained, but we have a gigantic opportunity to position the United States of America in a position for the second half of the second decade of this century to lead the world — this is not hyperbole — lead the economy of the world for the next 50 years,” Biden said.

Biden used the meeting to promote President Barack Obama’s recently announced proposal to make community college free for two years for students who maintain a grade-point average of at least 2.5 and make steady progress toward a degree or transfer to a four-year university.

During his State of the Union address Tuesday, Obama said 40 percent of college students attend a community college.

“Whoever you are, this plan is your chance to graduate ready for the new economy, without a load of debt,” Obama said.

The proposal calls for the federal government to cover 75 percent of the average cost of community college, with states picking up the rest. The proposal is expected to cost $60 billion over the next 10 years.

Congressional Republicans have essentially called the plan, which would be funded largely by tax hikes on high-income Americans and a fee on large banks, a non-starter.

Biden insisted, however, that the cost of college has become prohibitive for many people, and the added cost of housing, transportation and child care make higher education an even tougher goal to achieve.

He said that would change, however, “if you were able to have your first two years free because the community college has the course structure that’s transferable.”

In addition to students and administrators, local business owners also took part in the event.

Ninio Fetalvo, spokesman for the Republican National Committee, blasted the community college proposal as yet another burden on taxpayers.

“Delivering empty rhetoric and misleading proposals are hallmarks of Obama’s failed presidency, but the reality is Vice President Biden will continue to be a puppet for the president’s costly proposals as they continue to refuse to work with Congress to create real solutions,” Fetalvo said. “The president and vice president are misleading the American people on their college proposal, claiming it’s free, when in reality it costs billions of dollars and taxes the college savings plans of middle-class Americans.”

On Saturday, Biden will be in Irvine to deliver the keynote speech at the Patient Safety, Science and Technology Summit at the Hotel Irvine, 17900 Jamboree Road.

His motorcade could cause some traffic troubles for motorists Saturday morning. Police have advised motorists to avoid: