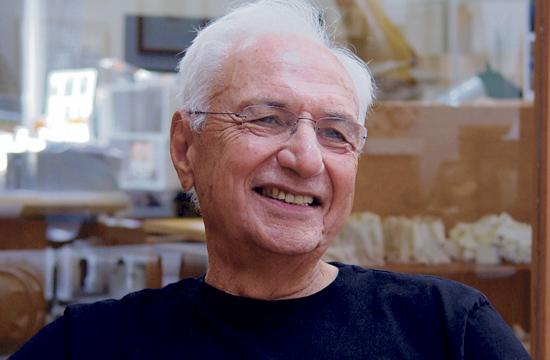 The special concert will be held Thursday, Feb. 5, at 7:30 pm at the Moss Theater on the campus of New Roads School in Santa Monica.

On the program are Bartok’s “Sonata for Two Pianos and Percussion” (1937) and two works by Bach, transcribed by Kurtag for piano four hands, “Chorale Prelude,” “O Lamb Of God Most Holy” (VIII), and “Sonatina From Actus Tragicus,” “God’s Time Is The Best Time,” BWV 106, as well as the world premiere by Norman, whose music has been hailed by the New York Times for its “daring juxtapositions and dazzling colors.”

Gehry, one of the most acclaimed architects of our time, is renowned for his bold, iconic postmodern designs including architectural masterworks such as Walt Disney Concert Hall in Los Angeles, the Guggenheim Museum in Bilbao, Spain, Dancing House in Prague and the Louis Vuitton Foundation in Paris, which opened in late 2014 to great acclaim.

Based in Los Angeles, he received the prestigious Pritzker Prize in 1986, was the subject of a documentary film by director Sydney Pollack, and has become a leading figure in mainstream culture, appearing in an Apple commercial and playing himself in an episode of the hit television show “The Simpsons.”

He compares architecture to music, saying, “It’s like jazz. You improvise, you work together, you play off each other, you make something.”

Tickets, beginning at $50, are available online at laco.org, by calling LACO at 213.622.7001, or at the venue box office on the night of the concert, if tickets remain. Subscriptions to all three Westside Connections concerts are available for $135.