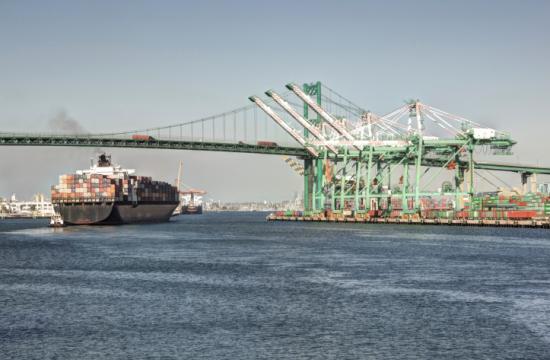 Dock workers at the Los Angeles and Long Beach ports on Friday protested a partial work stoppage ordered by a group representing West Coast terminal operators, saying it will slow down the unloading of cargo by several days.

But the terminal operators’ group, Pacific Maritime Association, countered that there is not enough room at the terminals, with cargo piling up due to the dock workers’ union, the International Longshore and Warehouse Union, Local 13, withholding the workers needed to move cargo out of the terminals and onto trucks.

The ILWU is in the midst of contentious negotiations with the PMA over labor contracts for west coast dock workers.

The spat prompted Los Angeles Mayor Eric Garcetti and Long Beach Mayor Robert Garcia to jointly urge both sides to back off, and to consider the effect of their negotiating tactics on the economy.

“Negotiations resume Monday and it’s in no one’s interest for either side to take further actions before then,” the mayor’s said.

They added the twin ports “play a critical role in our regional and national economy, and so those at the table bear a responsibility that extends far beyond the waterfront.”

“The prudent course of action is to keep people working and keep goods moving as negotiations continue,” Garcetti and Garcia said.

Other city leaders also raised concerns over the row, with Los Angeles City Councilman Joe Buscaino saying the longer that “protracted contracted labor negotiations” continue, “the more damage will be inflicted on our national and local economies.”

“I have many family and friends on both sides of the issue and urge each to be fair and come to an agreement as quickly as possible,” said Buscaino, who represents the harbor area.

“If this irresponsible PMA action stands and operators follow, it will take 8 to 10 days to unload a ship instead of the normal 2.5 days,” Bobby Olvera, president of Local 13, said. “The post holiday season is time to catch up on the tremendous back-up of ships waiting to be unloaded at the Ports of Los Angeles and Long Beach. It’s been this way for years.”

PMA officials said they are cutting the number of workers because there is not enough space at the terminals to unload cargo onto.

“It makes no sense to maintain the pace of removing containers from ships when there’s no room for them on the terminals,” PMA spokesman Wade Gates. “If a parking lot were full, you would clear out empty spaces before bringing in more cars. The same rule applies here.”

Gates blamed ILWU for the congested terminals, saying the union has been preventing qualified crane operators, whose job is to get cargo out of the terminals and onto trucks, from coming to work as part of a negotiating tactic.

“Removing qualified yard crane drivers from terminal operations is the equivalent of a football coach sending out 10 players and no quarterback,” Gates said. “You can’t run the play effectively. The congestion in the terminals is near a breaking point.”

An ILWU spokesman said the union was not withholding workers, and said there are not enough qualified crane operators because training has been reduced.

Gates said PMA is not budging on the directive to reduce the number of workers unloading ships.