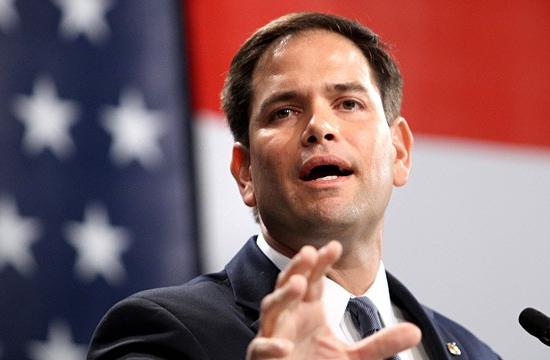 Prospective Republican presidential candidate Marco Rubio will conclude his fundraising swing through Southern California today with a $1,000 per person breakfast in Beverly Hills.

People who attend will receive a signed copy of the recently published book by the junior senator from Florida.

“I wrote this book because we stand at a critical juncture,” Rubio said. “What kind of country are we going to be? Will we surrender to Obamacare and other laws that crush innovation and entrepreneurship? Will we accept a powerful nanny state and the erosion of family values? Will we allow politics to kill the American dream?

“Or will we rise to the challenge and take back our legacy as the only nation on Earth that offers unrestricted opportunity for all?”

Proceeds will benefit the Rubio Victory Committee, a joint fundraising committee composed of Marco Rubio for Senate and Reclaim America Political Action Committee, which he formed in an effort to have more conservatives elected to the Senate.

Rubio had fundraisers scheduled Wednesday in Newport Beach and Tuesday in Costa Mesa and La Jolla.

“For too long, Congress and the administration have failed to prioritize our relations in this hemisphere,” Rubio said.

“This lack of attention has kept us from seizing the opportunities of a rising middle class, emboldened tyrants and non-state actors to erode democratic values, allowed global competitors to deepen their influence in the continent, and diminished our ability to respond to the proliferation of transnational organized crime and the violence and instability associated with it.”

Rubio pledged that as chairman of the subcommittee he would “promote bold measures that improve U.S. economic and security interests by addressing the region’s growing calls for transparent institutions, access to quality education, private sector competitiveness, and respect for political and economic freedom for all.”

Rubio also said he would also use the chairmanship to advocate for “closer ties with Canada, Mexico, and other regional partners such as Colombia as well as greater energy cooperation and trade.”

The subcommittee will hold its first hearing under Rubio’s chairmanship Tuesday, examining President Barack Obama’s re-establishment of diplomatic relations with Cuba and its implications for human rights in the communist country.

Born May 28, 1971, in Miami to Cuban-born parents, Rubio and his family moved when he was 8 years old to Las Vegas, where his father worked as a bartender at the Sam’s Town Hotel and his mother as a housekeeper at the Imperial Palace Hotel.

The family returned to Miami in 1985 with his father working as a bartender at the Mayfair House Hotel until 1997, then as a crossing guard until his retirement in 2007. His mother worked as a Kmart stock clerk until she retired in 1995.

Tavern on Main in Santa Monica is your home for awesome drinks and watching your favorite sports games on over...

Downtown Santa Monica hosted a Taco Crawl through the area with Danny Trejo and seven other participating restaurants..Video sponsored by...