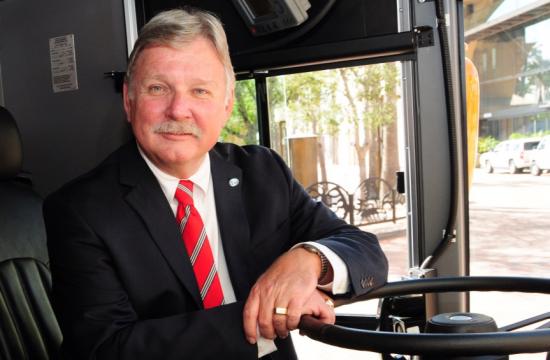 The Los Angeles County Metropolitan Transportation Authority’s CEO, who began his transit career as a bus driver, announced Tuesday he will leave the agency in April.

Art Leahy said his last day on the job will be April 5, when his contract with Metro ends.

Leahy called it a “privilege, honor and pleasure to serve as Metro’s chief executive officer the past six years.”

“My time at Metro has been filled with enormous successes, intense challenges and opportunities that have and continue to shape mobility for Los Angeles County’s 10 million residents,” he said.

The 65-year-old Leahy grew up in Highland Park and began his career in the transportation industry as a Los Angeles bus driver in 1971. He rose through the ranks of various agencies, and served a stint as CEO of the Orange County Transportation Authority. He also managed the transportation agency in Minneapolis-St. Paul.

During his tenure as Metro CEO, the agency introduced the Silver Line express bus service from El Monte to Artesia, the Orange Line extension to Chatsworth and a $1.2 billion upgrade of the Metro Blue Line.

He also led the city through two so-called “Carmageddon” events, during which the San Diego (405) Freeway underwent weekend-long closures to accommodate work on roadway improvements and widening in the Sepulveda Pass.

Mayor Eric Garcetti, who chairs the Metro board, said Leahy “distinguished himself through his ability to secure and leverage federal funding with local funding sources to get projects off the ground.”

He credited Leahy with guiding the agency through “the nation’s largest public works project” — through the implementation of the Measure R transportation program — and with making Metro buses “more accessible, more punctual and cleaner.”

City Councilman Paul Krekorian, who sits on the Metro board, said Leahy “deserves an immense amount of credit for shaping Metro into the robust, forward-thinking agency that it is today.”

Another Metro board member, Los Angeles City Councilman Mike Bonin, said Leahy “inherited a transit system in disrepair and brought it back up to the dignified standard the public deserves.”

“I’m grateful for the opportunity to work with Art on important, transformational projects like connecting Metro with LAX and I wish him the very best in his retirement,” Bonin said.