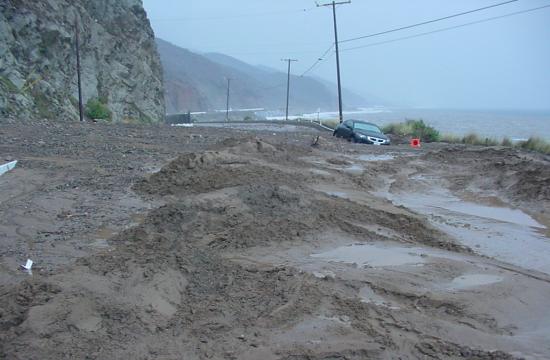 Caltrans officials now say it will be the end of the month before Pacific Coast Highway can be reopened to traffic between Malibu and Oxnard.

Complicating traffic along the Malibu coast is a new tunnel construction project starting tonight, which is scheduled to close Malibu Canyon Road at night. And work continues on PCH in Santa Monica, causing major delays there.

PCH was closed a month ago, when more than a dozen mudslides and rockfalls covered 8 miles of road with debris from steep hillsides and cliffs, which were denuded by the Springs fire seven months earlier. One car, with its driver inside, was nearly pushed into the Pacific Ocean at the height of the intense rainstorms.

Caltrans officials immediately said the cleanup would be a huge job, and gave a tentative reopening target of mid-January. On New Year’s Eve, the agency pushed that back, to sometime in late January.

The road remains closed from Las Posas Road, at the Point Mugu Navy gate, to Yerba Buena Road, near the Neptune’s Net landmark.

As many as 14,500 vehicles per day normally use state Highway 1 in that area, and the road is the route of choice for trucks delivering cement or other heavy goods to Malibu. Many of the mountain roads linking the region’s freeways to the coast are closed to trucks.

Many commuters between Ventura County and the Westside of Los Angeles have begun using the Ventura (101) and San Diego (405) freeways as an alternate route.

In Malibu Canyon, county workers plan overnight closures starting tonight to rehabilitate the 60-year-old tunnel three miles north of PCH. That road will be closed to all traffic for several months, from 9 p.m. to 5 a.m.

Night owls or early commuters should use Kanan-Dume Road, the county said, or take the 101 and 405.

In Santa Monica, construction continues on a major new sewer line under PCH, and one lane in each direction will continue to be closed through April. During rush hours, a center turn lane is used for traffic in the heaviest flow direction there.

The City of Los Angeles is building the sewer line in Santa Monica, and has said its project is on schedule and will conclude in April.