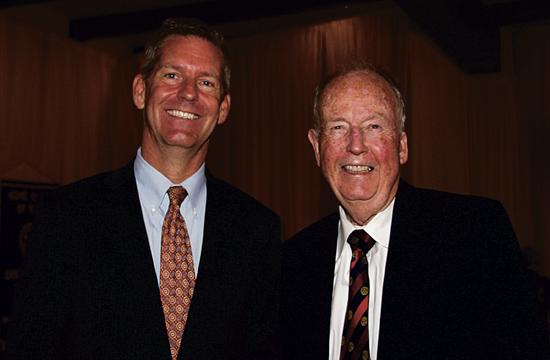 At the Jan. 23 Santa Monica Rotary Club meeting, the foundation’s motto – “Service Above Self” – was highlighted more so than usual throughout the afternoon. With an invocation by Rotarian Adam Lichtl, who touched on serving as “miracles in others’ lives,” the meeting started on an inspirational note as the members collectively sang a few songs and welcomed guests to their Rotary club.

The meeting continued as Rotarian Mitch Kraus presented a Community and Youth Grant to Catherine Jonas from WISE & Healthy Aging, who accepted the grant alongside Grace Cheng Braun, President and CEO of the organization. Jonas elaborated on the efforts of WISE & Healthy Aging as well as to what the grant will proceed toward.

The afternoon proceeded with the guest speaker of the day, Laine Wagenseller, who was introduced by his brother and Santa Monica Rotarian Scott.

Although Wagenseller works in real estate litigation in downtown Los Angeles, his topic was unrelated to his profession. As a member of the Rotary Club of Los Angeles, Wagenseller explained the significance of the Rotary motto in his life experiences as expanded on his trips to Uganda over the past five years, explaining his motives and objectives.

“I want to take today to tell you about a program that I’m working on called ‘Building Men in Uganda,’” Wagenseller said. “But before I start, I want to address the first question I always get: ‘how did I end up going to Uganda?’”

What started out as a seemingly casual conversation between church friends, who were the people that introduced Wagenseller to stories and photos of a Ugandan orphanage trip, concluded with the final decision to join them.

Wagenseller first struggled with the specificities of what realm of work he could assist the Ugandan orphans with, joking that the nurses and dentists had their obvious roles but that responsibilities were murky for a litigation attorney. However, after visiting a farm nearby the Ugandan orphanage, Wagenseller began to realize what he would be able to help with.

“At the farm there are 15 teenage orphan boys at a vocational school,” Wagenseller said while providing club members with pictures. “These are boys who have usually dropped out of school earlier and are learning carpentry and agriculture. Most people take a quick tour of the farm, say hi, and leave. One thing I noticed was that there were no adult men around the boys.”

Wagenseller decided after his first trip that he wanted to work with these boys. After reading a Christian book that illustrated how “boyhood is the time of affirmation,” Wagenseller’s goals were reaffirmed.

“This is what I wanted to do: instead of this idea of building things, I wanted to build men,” Wagenseller said.

For the past couple of years, Wagenseller has partaken in various activities that promote positive growth and learning in the Ugandan boys’ lives. From having heart-to-heart conversations to playing basketball, Wagenseller makes sure to focus on both the emotional and physical development of the orphans.

“We’ve also taken field trips to different parts of Uganda and visited large commercial farms and technical schools,” Wagenseller said. “And for the boys who have never been outside of their village, this shows them that there’s a great big world out there and that there are so many things to do and learn about.”

Wagenseller made sure to emphasize the impact that the boys have on him in return, bringing up individual stories about specific boys and how he becomes “so proud and choked up” on multiple occasions.

Wagenseller concluded his presentation by sharing about one boy in particular – then-11-year-old Adolf – who was crippled and terribly burned as a punishment for trying to retrieve food.

“He had an infectious personality and a huge smile, but you couldn’t help but notice that he walked on all fours,” Wagenseller said.

Adolf was brought to the U.S. with Wagenseller’s help in order to receive reconstructive surgery for his severely burned legs that had healed at 90-degree angles. The child stayed with Wagenseller’s brother and sister-in-law during his time in the U.S., attending school, learning some English, and even making local news.

Wagenseller concluded with the deep lesson he learned through Adolf as the child only wanted to “thank God” upon finishing his surgery. Years later, Wagenseller was able to play basketball with a physically healed Adolf.

“The story of Adolf is a Rotary story,” Wagenseller said, as he explained how it was through Rotary connections that he was able to reach out to the organization that coordinated his recovery, the Children’s Burn Foundation. “It really reminds me of the reach of Rotary.”