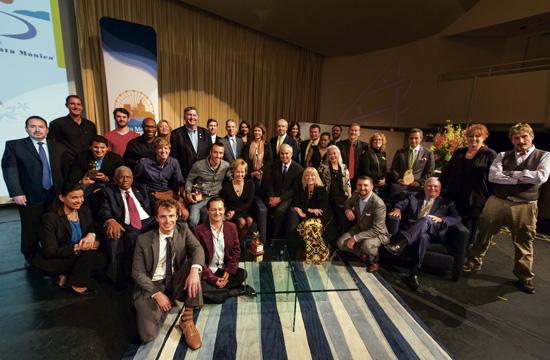 Gathering a diverse range of Santa Monica’s business, government, and resident communities, the annual State of the City was held Tuesday and presented an interesting array of thought-provoking topics.

Beginning with a networking breakfast, the event, organized by Santa Monica Chamber of Commerce, saw the foyer of the SGI Auditorium on Wilshire a hive of activity at 7 am Jan. 20, with new connections made and old ones rekindled.

“This is a great opportunity to get out and meet with others in the business community,” commented event attendee Liza Strom. “We spend so much of our time in our offices, while not always realizing who are neighbors are.”

“I have just moved to the area,” he said. “This morning was, for me, the perfect time to make new connections and get a good insight into what is going on in Santa Monica.”

Aimed at uniting those active in the local area, and with a theme of Game Changers – Transforming the Landscape of our City, the event focused on connecting the business community with policy makers to support a healthy local economy and quality of life, according to Santa Monica Chamber of Commerce President Laurel Rosen.

“When we have a thriving business community, we all win,” she said. “Business and sales taxes contributed more than $76 million to the City’s General Fund in 2013,” Rosen cited, adding that the money goes towards parks, services, and amenities that everyone enjoys in Santa Monica.

Celebrating 90 years since founding in May this year, one of the keys to the Chamber’s longevity is its ability to keep a finger on the pulse of what members want, Rosen said. She unveiled the Chamber’s new logo and experienced-based website during her opening address, both aimed at helping the organization communicate more effectively with members and the community.

“It is imperative that we continue to maintain the open communication between local business owners and leaders with city officials to continue building our thriving and prosperous community,” commented Julia Ladd, Chair of the Santa Monica Chamber of Commerce.

“We have broken through the 1,000 member ceiling mark, and participation has never been stronger,” Ladd said.

Providing the keynote address, Santa Monica Mayor Kevin McKeown said that at this point in time, Santa Monica is positioned to thrive as a relatively small, but trendsetting, world-class beach city.

The Mayor cited six key “game-changing” trends that are shaping Santa Monica, and “which require our attention and thoughtful policy making”; exploding growth in technology; the rise of Millennials; water; the rising cost of land; the rise of residents; and the updated zoning code for the City of Santa Monica.

Referencing the importance of business for sustaining local services, McKeown said that while local business is critical to safety, quality of life and sustainability, “we must not take it for granted, and we must be aware that local business is changing.”

“We are currently expanding free Wi-Fi hotspots throughout the most-frequented parts of town and providing open access to a variety of government generated data,” McKeown said. “Coming soon: we will experiment with the delivery of high-speed CityNet services to residents, who increasingly work at home.”

Technology and the importance of tech start-ups took center stage in the second half of the State of the City program, with a Game Changers Panel discussion featuring local leaders who are either involved, or rely on, tech in their industry.

The inaugural Santa Monica Tech Start Up Awards were presented to Brownlist, Buddytruck, The Mobile Majority and Parkt, with the Tech Excellence Award going to The Honest Company.

Each year, a committee of business and community leaders recognizes individuals and organizations that have contributed to the economic success of the city while demonstrating commitment to community wellbeing through social, humanitarian or environmental leadership, according to the Chamber.

More information on Santa Monica Chamber of Commerce events can be found at smchamber.com or by calling 310.393.9825.

• Do you have a story idea or news tip? Contact Jennifer Eden by email at [email protected].