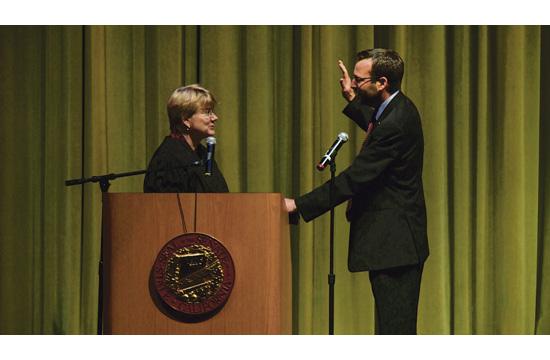 Newly elected California State Senator Ben Allen (Dem-26th District) chose his old campus of Santa Monica High School for his community swearing-in ceremony Saturday, hosting lawmakers and officials from across the region alongside students and grassroots campaigners for a night of community celebration.

Making his debut campaign speech on the same Barnum Hall stage as a ninth grader running for a spot on the Associated Student Body House of Representatives, Allen said that being sworn in as a Senator on the same stage added a special element to the evening.

The event marked Allen’s beginning of his tenure with the California State Senate and was attended by family, friends, constituents, and other local dignitaries.

Young people were very much part of his election campaign and featured prominently throughout the evening, Allen explained.

“I want to keep that energy going,” he said. “I’m looking forward to having a lots of young people helping us out. We’re going to be having lots of community groups helping me. I’m going to be a very responsive, active and engaged locally-elected official.”

After being administered the Oath of Office by the Honorable Holly E. Kendig, Superior Court Judge, Senator Allen stated: “It is extraordinarily challenging, fulfilling, meaningful work. It is also difficult work. I ask for your help, you who helped to bring me to this moment, I ask for your help as we seek to address these great challenges. Help me, help the other leaders who have spoken today and who are in attendance today to do the difficult things; To give us the space and encouragement we need, but also to help inspire in us the ‘fierce urgency’ that will give us the courage to pursue those policies that will bring us ever closer to Dr. King’s vision of a truly ‘beloved community.’”

Following the swearing-in ceremony, Santa Monica Mayor Kevin McKeown presented Allen with a commendation from City Council and a symbolic gift signifying Santa Monica’s high regard for the Samohi graduate and former school board member.

While at Samohi, Allen starred in the theater program’s production of “Peter Pan” as the villainous Captain Hook. Explaining that Santa Monica does not have a Key to the City, McKeown instead gave Allen the Hook to the City, which Allen playfully brandished for the rest of the evening.

“It was a wonderful celebration,” Allen added. “We really tried to highlight the extraordinary work of arts education and the importance of educating young people.”

Grassroots community members will be at the heart of Allen’s tenure in office, he said, committing himself to a continual focus at what is happening at a local level.