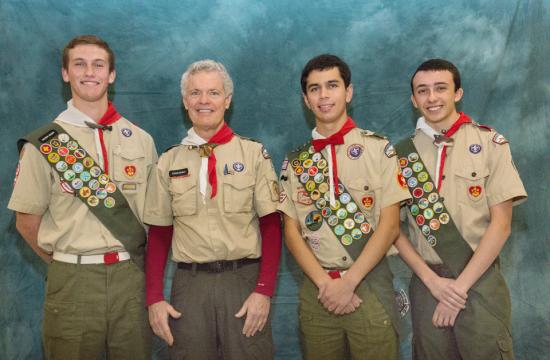 Three Santa Monica scouts will be awarded the rank of Eagle Scout at the Troop 2 Eagle Court of Honor this Sunday, Jan. 25.

The Eagle rank, achieved by only two percent of Boy Scouts, is the highest rank in scouting and honors exemplary effort, leadership, and service.

Each of the scouts being honored led a major project to improve quality of life in the community. Brown built an equipment shed for Santa Monica Pony Baseball at Los Amigos Park.

Cohen’s project at John Adams Middle School made a number of safety improvements to the school grounds. Dozens of Troop 2 scouts contributed to each of these community service projects.

Since 1946, Troop 2 has been an active force in the community with its scouts’ skills and volunteer projects. Troop 2 travels to scout camps and high adventure destinations throughout the United States.

With these three scouts, Troop 2 will have graduated 321 Eagle Scouts. Troop 2 scouts and alumni have been acknowledged and credited with using their first aid skills to save at least 63 lives.

Troop 2 teaches boys to treat others with respect, honesty and kindness. Troop 2 does not engage in or condone discrimination of any kind.