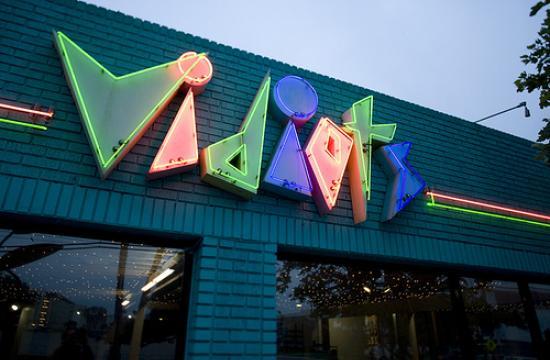 Local Santa Monica landmark Vidiots is preparing to close its doors forever come mid-April, unless a financial hand is extended to enable the movie treasure trove to continue business well into the future.

Started by best friends Cathy Tauber and Patty Polinger almost 30 years ago, Vidiots quickly made a name for itself as a go-to resource for interesting, alternate and hard-to-get movie titles. It also grew into an integral part of the Santa Monica small business and neighborhood scene.

Since news of the impending closure broke earlier this week, Tauber and Polinger have been inundated with support from customers and community members alike.

“It been overwhelming,” explained Tauber. “There is a slight glimmer of hope that it could be saved, so it’s not a 100 percent done deal,” she added. “The response has been incredible from the community.”

Local forums and message boards have been full of messages of support.

“Thank you for all you have done for the film loving community in Santa Monica,” resident Barbara Gluck wrote on The Mirror’s website. “We are deeply grateful to you…and please know that you and your events will be missed.”

Suggestions on how to save Vidiots have also proliferated in recent days, including a push to start crowd-funding and Kickstarter campaigns.

“What about a fundraiser or turning Vidiots into a Cinefamily style place for screenings and events?” Peter suggested online. “I’m sure there are filmmakers and patrons who will donate to save Vidiots!”

Entertaining the option of keeping Vidiots’ doors open, Polinger explained that it would take a commitment for the next couple of years to keep the business running.

Vidiots began 30 years ago with a clever idea – looking for an escape from their office jobs at the time, the store was inspired by a magazine article that Polinger read at the time.

“We started realizing that there were a lot of really interesting titles on DVD, actually it was on VHS in those days that we weren’t seeing in our local store and it sparked the idea to open a place that would have video art and foreign films and documentaries and have a lot more hard to find options,” Tauber explained.

Vidiots hit its peak in 2003 and despite diversifying, building a screening room and offering classes, the business has been in steady decline since, Polinger explained.

“It is no secret to our customers and the community at large that we have been struggling to stay open for the last few years,” the pair said in a statement. “Please be assured that we have done everything possible to continue our mission but it was not enough to make up for the precipitous drop in rental income – a 24 percent drop in the last five months alone.”

A combination of streaming, DVRs, and “really good TV” being made, has added to Vidiots decline, Tauber said, explaining that these days people spend a lot of time watching TV over film.

Vidiots didn’t used to be so new-release driven, Polinger said. “We were more older, catalogue driven, but as we’ve become a more local business for people who live closer, we’ve sort of become a little more main stream, offering to a wider group – people who want mainstream and also stuff that’s hard to find.”

The pair issued heartfelt thanks to their donors over the years who have enabled them to keep their 30-year collection together.

“It has been a wonderful journey and we thank all of our staff, past and present, as well as our loyal customers throughout the years for making Vidiots a prime resource for Los Angeles film lovers,” they said.

As for what’s next for Tauber and Polinger: “It’s been such a big part of our identity – before our kids, before our husbands, so I think we would both have to press a reset and have a little time to reflect and look at the next chapter.”