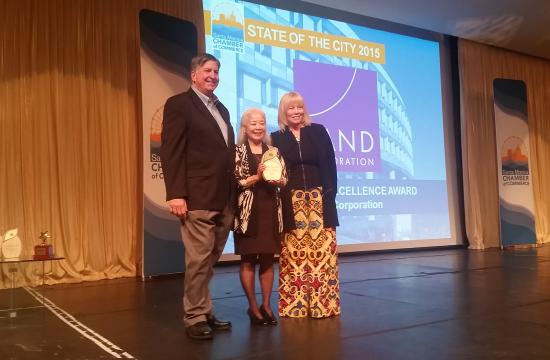 Santa Monica’s business community converged Tuesday morning at the SGI Auditorium for the annual State of the City breakfast where a common theme of “game changers” was heard throughout the event.

The Santa Monica Chamber of Commerce handed out three awards to those who have made significant contributions to the city.

Santa Monica Chamber of Commerce president Laurel Rosen spoke about the the tremendous synergy in Santa Monica between the business community and the city itself.

“The annual State of the City event provides an important update by our city leaders as well as offering a robust and ambitious business discussion with some of Santa Monica’s game changing leaders,” Ladd said.

“The State of the City breakfast is an excellent means of getting the latest in what’s happening in Santa Monica, and the 2015 event is focused on ‘game changers’ – the trends, projects, and individuals who are shaping our fair city’s future,” he said.

Santa Monica Mayor Kevin McKeown spoke about a number of game changers, including the rise of residents.

See Friday’s edition of The Mirror for a full recap of the State of the City.