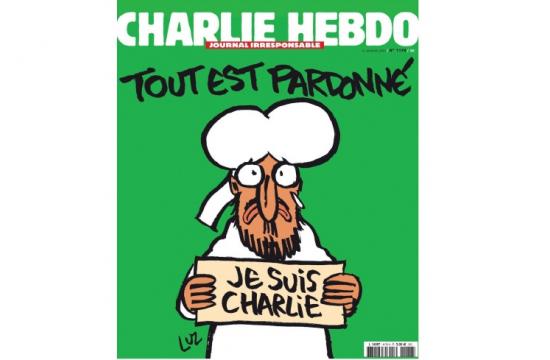 Charlie Hebdo, the French satirical magazine, published the issue dubbed as “The Survivors’ Issue” on Jan. 14. The cover is a cartoon of the Prophet Muhammad, a tear in his eye, carrying a “Je suis Charlie” sign. The caption above reads, “All is forgiven.”

Sadly, the magazine Charlie Hebdo is known now to the world because of the terrorist attacks of Jan. 7 in Paris. Crazed gunmen shouting “Allahu Akbar,” which translates “God is great,” murdered 11 members of the magazine staff, a policeman, and four people in a kosher market.

Charlie Hebdo is wildly famous in France. The cartoonists who died were household names with star status. The magazine carried on the French tradition of irreverent satire that doesn’t have a parallel in the U.S.

More than a million people took to the streets of Paris on Jan. 11 to demonstrate their support for the French principles of “Liberte, Egalite, Fraternite” and to show their condemnation of violence. The tone of the march was one of support for principles of democracy and for tolerance.

Demonstrators wore “Charlie” headbands and carried signs saying “Je suis Charlie” (“I am Charlie”). President Hollande of France and Chancellor Merkel of Germany were among the many world leaders present at the march.

In the U.S. the violent and murderous attacks have been everywhere in the news and on the media. Artists and actors, writers and journalists, politicians and community leaders, philosophers and religious leaders paid homage to the people who were killed in France and have tried to understand what to do to address the violence and protect democratic freedoms.

Curious as to what was happening in Middle Eastern countries I turned to Al Jazeera’s reporting on the Turkish response to the attacks.

Al Jazeera quoted Turkish President Edogan talking about Charlie Hebdo, “This magazine is notorious for its provocative publications about Muslims, about Christians, about everyone. This is not called freedom. This equates to wreaking terror by intervening in the freedom space of others. We should be aware of this. There is no limitless freedom.”

The site Syrian 360 reported, “Hezbollah condemned the reiterated and serious abuse of the French magazine of Charlie Hebdo in its Wednesday edition which included drawings that abuse Prophet Mohammad (PBUH), Islam and all the religions as well as the human sanctities in general.”

The New York Times ran a story on Muslim response and quoted Ercan Ezgin, a Turkish lawyer, as saying, “Insulting the prophet can never be regarded within the context of media freedom. This cartoon bears the danger of deeply provoking billions of Muslims. It should never be acceptable to depict our prophet in such a cartoon, poking fun at him, showing him as if he’s shedding tears.”

I do not accept the rules of Sharia.

I am an American and I follow the rules of the United States. The U.S. Constitution guarantees and protects free speech.

Moreover, why is it okay to murder someone who draws a cartoon you find offensive? Murder is an incomprehensible reaction to a cartoon you don’t like.

Not all of the people carrying “Je suis Charlie” signs support each and every cartoon. What they support is the right of the Press to freely and safely publish its work. What they recognize is the value of free speech to a democracy.

Just this week, Charlie Hebdo posters were put up in West Los Angeles. The posters were anonymously taped to transformer boxes along Sunset Boulevard, in the Palisades and in Brentwood. They show a July 2013 Charlie Hebdo magazine cover. On the cover is a cartoon of a Muslim man holding the “Coran” and a caption that reads in French, “The Coran is shit it can’t stop bullets.” Added to the surround of the poster is the film title, “Good Will Hunting?” with a question mark.

Are the posters in West L.A. in tribute to Charlie Hebdo? I think yes. That leaves me wondering about the addition of “Good Will Hunting?” on the borders of the poster.

The Hollywood blog, The WRAP, thinks the addition may be related to the Ben Affleck/Bill Maher heated and confusing exchange on the Bill Maher show. Or they speculate that the words were added because the film “Good Will Hunting” was co-written by Affleck and Damon. Or because Affleck and Damon both live in the area they would see the posters. But really, that all seems to be quite a stretch.

What we can and do all share is the profound shock of yet another act of senseless violence. With each one our world is shaken. Schoolgirls kidnapped. Elementary school children shot. Suicide bombers. Torturers. It’s a list that goes on and on and with each senseless act of violence so many suffer, so many die, so many lives are condemned to grief. Yet I take heart from the humanity and compassion of a crying Prophet.

“Nothing Sacred” is a motto at Charlie Hebdo. Always offending someone through their caricatures and cartoons they also always have a moral point to make. Humor has the magnificent ability to expose deep flaws in humanity and yet allow us to still hear what is being said. We usually don’t think of people who can make so many people laugh as being in danger. Yet clearly they are.

Charlie Hebdo attorney Richard Malka said, “A good issue of Charlie Hebdo is one that you open, one that frightens you when you see the cartoon, and then makes you laugh out loud. We won’t give in, otherwise it wouldn’t make any sense.”