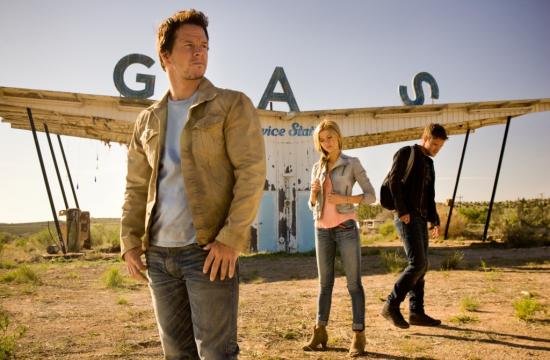 The action sequel “Transformers: Age of Extinction” has a leading seven nominations heading into tonight’s 35th Golden Raspberry Awards, the awards-show spoof that skewers the worst of movies from the previous year.

The Michael Bay-directed film is nominated for worst picture of the year, along with “Kirk Cameron’s Saving Christmas,” “Left Behind,” “The Legend of Hercules” and “Teenage Mutant Ninja Turtles.”

Cameron has a worst-actor nomination for his role in “Saving Christmas,” and he will square off for the dishonor against Nicolas Cage for “Left Behind,” Kellan Lutz for “The Legend of Hercules,” Seth MacFarlane for “A Million Ways to Die in the West” and Adam Sandler for “Blended.”

Sandler’s “Blended” co-star, Drew Barrymore, is up for worst actress, along with Gaia Weiss for “The Legend of Hercules,” Cameron Diaz for “The Other Woman” and “Sex Tape” and Melissa McCarthy for “Tammy.”

Diaz also has a nomination for worst supporting actress for “Annie.” She will be competing with Megan Fox for “Teenage Mutant Ninja Turtles,” Brigitte Ridenour for “Saving Christmas,” Susan Sarandon for “Tammy” and Nicola Peltz for “Transformers.”

Kelsey Grammer is up for worst supporting actor for his work in “Transformers,” “Expendables 3,” “Legends of Oz” and “Think Like a Man Too.” Mel Gibson and Arnold Schwarzenegger are both nominated in the category for “Expendables 3,” along with Shaquille O’Neal for “Blended” and Kiefer Sutherland for “Pompeii.”

Michael Bay is nominated for worst director for “Transformers,” along with Darren Doane for “Saving Christmas,” Reeny Harlin for “The Legend of Hercules,” Jonathan Liebesman for “Teenage Mutant Ninja Turtles” and MacFarlane for “A Million Ways to Die in the West.”

The combination of any two “Transformers” robots or actors are nominated for worst screen combo, as were Kirk Cameron and “his ego” for “Saving Christmas,” Diaz and Jason Segal for “Sex Tape,” MacFarlane and Charlize Theron for “A Million Ways to Die in the West” and Lutz and “his abs, his pecs or his glutes” in “Hercules.”

The Razzies will include a new category this year, known as the Razzie Redeemer Award, acknowledging past Razzie winners who have gone on to far better projects. The inaugural nominees are:

— Ben Affleck (from Razzie winner for “Gigli” to Oscar darling for “Argo” and “Gone Girl”);

— Mike Myers (from Razzie winner for “Love Guru” to docu director of “Supermensch”);

The Razzie Awards will be presented by the Golden Raspberry Foundation at the Montalban Theatre in Hollywood.