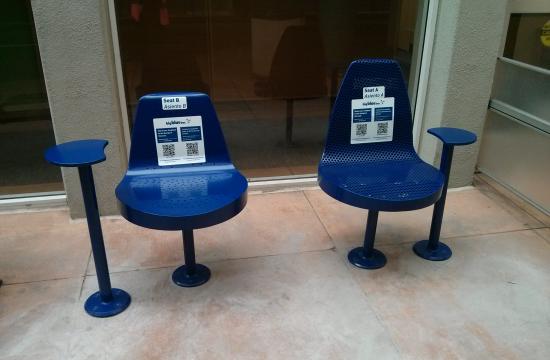 Santa Monica transit authority Big Blue Bus has started soliciting public input on two proposed redesigned bus stop seats as part of its Santa Monica-only bus stop project. The two examples will be installed at locations around Santa Monica on a rotating schedule over the span of three weeks.

Feedback can be provided through an online survey (www.bigbluebus.com/BSIPseatsurvey), by obtaining a paper survey from Ken Edwards Center, or by calling 310.451.5444 during business hours.

Customers who complete the survey will be eligible to win a free 30-day pass.

This is the remaining schedule to seat the prototypes:

In July 2014, BBB announced its plans for modifying the design of its new bus stop amenities in response to community feedback. In developing a plan for redesigning the seat, Big Blue Bus sought to include feedback from riders and stakeholders throughout the process.

The original bus stop design was initially available for viewing at the BBB yard. With the redesign, BBB will be installing it in  different places around the City so that as many people as possible can have a chance to try it out, provide feedback, and obtain buy-in.