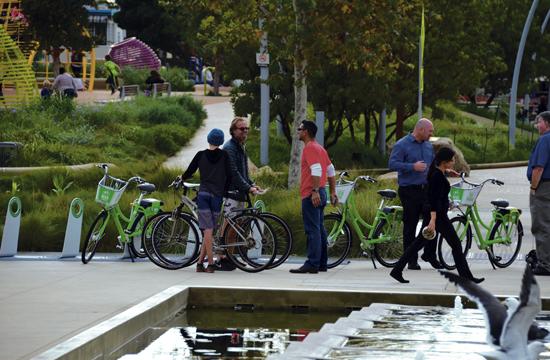 Santa Monica’s new bikeshare system has a fresh identity, with “Breeze” topping the voting charts due to its light, bright implications.

Following a survey that included residents, cyclists and commentators, Breeze was nominated in reference to Southern California’s airy, bright coastal climate and lifestyle and sums up the sensation of bike riding, conveying the ease of bike share transportation, according to City staff.

bLINK and MiGo were also in the mix.

Based on how the proposed names resonated with the public, staff recommended Tuesday Feb. 10, during the City Council meeting, that councilmembers adopt the system name Breeze as it is “light, easy to grasp and sets a good tone for system users to enjoy their ride and get into the spirit of moving through Santa Monica.”

The name Westside Ride was also adopted for the name of a future regional umbrella bikeshare system.

The identity concept and name options were developed by Phelps, under contract with CycleHop, the system operator, pursuant to the bikeshare procurement contract.

All names nominated were consistent with the initial guidance provided by the Council and were intended to reflect the regionally cooperative effort and close association with public transit, according to the City.

Both names were approved and passed unanimously by Council on Tuesday.

The naming of the bikeshare program follows City Council’s authorization of a contract for the procurement, installation and operations of a bikeshare system, on Nov. 11, 2014.

The initial contract to CycleHop is worth $5,615,567 for the purchase, installation, and operation of a 500-bicycle bike sharing system.

Bikeshare systems are identified as a group by their branding and identity elements that clearly distinguish system bikes from other private bikes, according to City staff, with many systems select either a name based on a specific geography, such as “Bay Area Bikeshare;” a name based on a particular sponsor, such as “Citibike;” or a name based on a concept, such as “Divvy,” “Bixi,” or “Pronto.”

At the Nov. 11, 2014 meeting, Council directed staff to develop a concept in the third category – concept-based – that would provide an opportunity for local expression within an identifiable regional system.

Council also directed staff to use the color green for the bikes and to incorporate the Metro logo to associate with a larger regional system.

Breeze will be featured on station components, in marketing materials and will be placed prominently on each bicycle down-tube. Website design and character will also be based on the name and will feature maps and system information, transit connections, and the City’s role as system owner in promoting active transportation and clean air.

Tuesday night’s meeting at City Hall also saw the discussion of sponsorship placement on the bikes. While no on-site advertising is permitted, the opportunities for sponsors to gain maximum exposure are great, said City Senior Planner and Bicycle Coordinator Lucy Dyke.

“We are currently attempting to find a sponsor and the space we would like to offer them, the whole universe of space where there could be a corporate message, where you could see – is the basket and the triangle of the frame – on both sides – that space and nothing else,” Dyke explained.

Santa Monica’s bikeshare system is funded by a Metro grant and is a first phase of a regional bikeshare effort being developed in coordination with Metro and multiple jurisdictions, including significant participation by the Westside Cities Council of Governments.

“These partners share the vision of one regionally integrated system that serves a public transportation role and is seamless for the consumer; however, there is no guarantee that other agencies will select the same name as Santa Monica,” City staff said.

Accordingly, Westside Ride was adopted so if the system expands to include compatible bicycles deployed under a different name, Westside Ride will communicate that the systems are all coordinated as one consortium.

City staff will now seek official Metro authorization for the use of its logo, and consultants Phelps will develop the concept and prepare specifications for coloring and marking the bikes and equipment. These will then be provided to the manufacturer and will be incorporated into materials being developed to promote the launch and support outreach efforts.