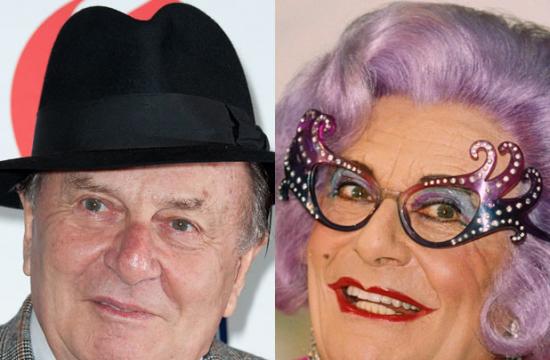 What can you say about Australian-born Dr. Barry Humphries’ “Anima,” Dame Edna, that hasn’t been said over the past 60 years? Well, as luck would have it, this was my first experience with the Grand Dame of nuanced “nastiness,” so I can talk about her performance with virgin eyes.

Direct from London’s West End Stage, and brilliantly directed by Simon Phillips, the fun began with pre-set music from the 30s and 40s, creating a lively atmosphere.

Air kisses were blown back and forth as friends recognized each other setting the tone for an evening of ribald frivolity. Trust me. No one left disappointed at the non-stop hilarity that punctuated Dame Edna’s performance in “Dame Edna’s Glorious Goodbye – The Farewell Tour,” gracing the Ahmanson Theatre stage.

With the production, sub-titled “A Meditation on Loss, Gender, Climate Change, Gay Marriage and Ethnicity,” no subject was safe from her sharp, barbed observations.

The fun began with Dame Edna’s voice issuing commands about texting, talking, photography, etc., delivered in a most comedic way.

The official frolicking began with a short film projected through one-half of her signature giant sunglasses. The film featured Hugh Jackman, Geoffrey Rush, and Kelly Osbourne, all of whom told dirty little secrets about Dame Edna, setting the tone for the ensuing wackiness.

The star of the show entered to thunderous applause and whistles. The Grand Dame was dressed from head to toe in exaggerated sparkling glitter, topped off by her purple wig, gilding the lily to its max.

This master of lightening repartee wasted no time in attacking the audience with her “disparaging” comment about Los Angeles, “I wanted to do a show from the intellectual capital of the United States.” Her comment brought the house down, which was pretty much audience response throughout the evening.  After this mass approval, she quipped:

“I almost feel the same about you!”

Scanning the audience from her royal stage, she commented on the poorly dressed audience, directing her comments to the cheap seats in the balcony, “You poor ‘pawpies.’ I guess you can’t afford to spend much on tickets.”

She also warned them not to lean over too far. Still checking out the audience, she noticed a few empty seats: “They belong to subscribers who couldn’t make it because they’re dead.” Although much of her repartee is probably scripted, there are ample openings for improvisation.

“I wouldn’t insult you with a rehearsed show,” she quipped.

Throughout Act I, Dame Edna used the audience as fodder for her “vicious,” but “loving” tongue. She trolled the first few rows of the theatre in search of victims, one of whom was a young lady named Anji – spelled with a “j.” That unique spelling did not pass by unscathed and Edna made a comment about “finding individuality.” But, Anji was not off the hook of the Dame’s condescending inquiry:

“Where do you live Anji?”

“There are lovely homes out there. Are you in any of them?”

“I live in an apartment.”

Just reading these lines, you might not get the hilarity, as the comedy springs from her crack timing, deadpan facial reactions, and double takes (think Jack Benny).

Another audience member was asked some personal questions:

“That’s a form of loneliness.”

In describing her own “marriage,” she quipped: “It was a fairy tale marriage. A Grimm Fairy Tale.”

Interspersed between her barbs, were a few “kitschy” dance numbers with Dame Edna backed up by a well-trained dance ensemble consisting of Ralph Coppola, Brooke Pascoe, Armando Yearwood, Jr., and Eve Prideaux, who choreographed the campy dance routines, which fit the overall zaniness of the production.

The highlight of Act II was a very funny mock marriage between two audience members who did not know each other. She bestowed an Indian (from India) head piece on each of them, made them hold hands, and recited some hocus pocus prayer at the end of which she announced them husband and wife. A minor detail was the “husband” was already married and his wife was seated in the audience. A special surprise awaited the new “bride,” which I cannot reveal as it would really be a “spoiler,” but I guarantee you an unbelievable climax to this theatrical marriage.

If you haven’t already figured it out, most of Dame Edna’s quips and interaction with the audience are risqué, or subtly cutting, but somehow, with her unique brand of delivery, she’s not offensive.

Towards the end of the evening, the audience was treated to an unexpected surprise. Each one was given a gladiola with the request to sway in rhythm. She had them start over a few times to get it right. Just imagine 2,000 people holding a flower and swaying back and forth. It was quite a spectacle.

At 80 years of age, this could really be Dame Edna’s farewell tour, but one could only hope that she’ll swing by this way again.