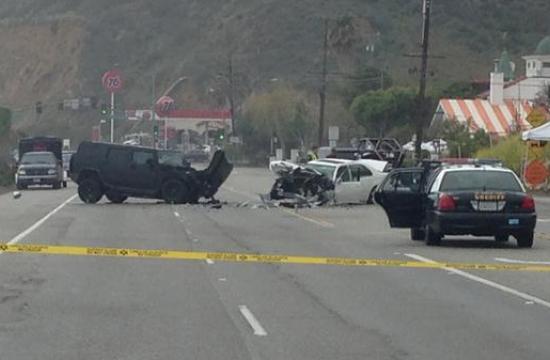 Detectives from the Malibu/Lost Hills Sheriff’s Station have put out a call for witnesses to a multi-vehicle crash in Malibu involving former Olympian Bruce Jenner, in which a 69-year-old woman was killed.

Kim Howe of Calabasas died at the scene of the noontime Saturday collision on Pacific Coast Highway near Corral Canyon Road, which closed a two- mile stretch of the highway for hours and left several others with non-life- threatening injuries.

Jenner, whose apparent transition from male to female landed him on the cover of this week’s issue of People magazine, was being tailed by paparazzi, but sheriff’s Sgt. Philip Brooks said the reality television star was not trying to outrun them at the time of the four-vehicle crash.

Brooks said investigators would examine cellphone records of all the motorists involved in the crash to determine whether anyone was texting at the time.

Jenner, who was unhurt, issued a statement Sunday, saying he was praying for Howe’s family and would continue to cooperate fully with the crash investigation.

“My heartfelt and deepest sympathies go out to the family and loves ones, and to all of those who were involved or injured in this terrible accident,” he said in a statement released by his publicist. “It is a devastating tragedy and I cannot pretend to imagine what this family is going through at this time. I am praying for them. I will continue to cooperate in every way possible.”

The 1976 Olympic decathlon gold medalist’s Cadillac Escalade, hauling an off-road vehicle on a trailer, then rear-ended the Lexus, which pushed the sedan into the path of an oncoming Hummer SUV.

“Mr. Jenner is constantly followed by paparazzi, he was aware of paparazzi following him,” Brooks told City News Service. “He was not trying to elude them or anything (and) they were not chasing him. They just follow him and he knows ‘Yeah, there’s paparazzi with me.’ As you know, on PCH it’s a straight highway; you can’t elude anyone.”

He noted that in the pileup, the victim’s car “was essentially sandwiched by the two heaviest cars possible on the road.”

A major issue that remained unclear was why the Prius, driven by a woman, had stopped or slowed.

“She’s not paparazzi, she was kind of unclear” about why she was blocking traffic, Brooks told CNS.

Sgt. Tui Wright with the Malibu/Lost Hills Sheriff’s Station said three adults and two children, including a baby, were triaged at the scene for non- life-threatening injuries. He said the driver of the Prius apparently later went to an urgent care facility to be checked out.