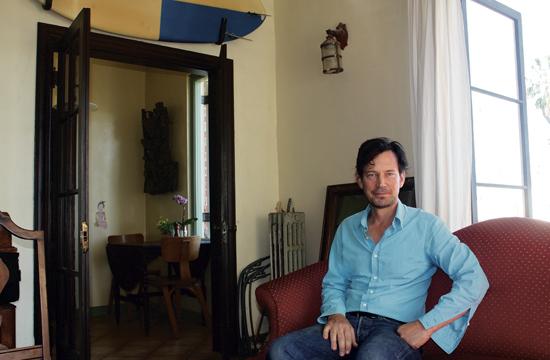 The remaining two residents living at Palihouse Santa Monica, formerly Embassy Hotel Apartments, are set to be evicted in May. The legality of such a process is under the spotlight after stark revelations reveal that the sudden classification of the building from multi-family residential to hotel, is dubious.

Part One: Investigation Palihouse: Neighbors Up In Arms

Artist Charles Fine moved into Embassy Apartments in 1977, the building has been his home for 38 years.

Describing the City-Landmarked structure as once a haven for stylish elderly ladies, artists, writers, and the odd vagrant, Fine said he has witnessed a complete transformation from a ramshackle apartment residence to the busy hotel that Palihouse is today.

“I was in my late 20s when I moved in,” Fine explained, “but I had become friendly with the old gals [who lived there] and I helped them out from time to time.”

“It’s a completely different environment now,” he added. “It’s not as if the environment suddenly is rowdy or overwrought, but it’s not a quiet residence.”

Aiming to be objective about his imminent eviction, Fine said the he is faced with finding a new home after a previous agreement between the building owners and the City to keep the Embassy a mix of hotel and residential units was overturned in court and a new agreement forged.

So that’s that, according to the City.

“I also wondered about it and still do,” the artist said about the Agreements, adding that Embassy tenants were notified about the second Settlement after a decision had already been reached, leaving them no room for recourse.

Second remaining tenant Barry Sherman moved in to the Embassy in 1996. Falling in love with the building at first sight, Sherman tried on countless occasions to rent an apartment, finally sending in his then-girlfriend to sweet-talk the 87-year-old manager into offering a one-bedroom apartment to the young couple.

“It was all over-grown, there were big Magnolia trees and it was jungle,” Sherman said of the Embassy. “The halls were all dark and they were lime washed a very lovely green and everything was quiet. You walked in and it was dark. Everything was overgrown. It was an absolute jungle. It was beautiful. Art work, from previous people who had been in the building, painted in the building…”

Now 19 years later, Sherman said he dreads to think about a future without his sun-lit, character-laden home.

“It was a disaster!” when he arrived, Sherman lamented, describing graying carpets, a sofa up on bricks and dirt coming in through the walls.

“I ripped up the carpet, stripped the cabinets, took the 15 layers of paint off the doors and at my own expense, re-did it all,” he said.

Sherman’s past few years in his apartment have been far from the “Tenessee-Williams-esque” home that he signed up for. Faced with bullying and harassment by the owners after he refused to accept a lump sum of cash and conditions to move out, Sherman has been served with a slew of ousting tactics in an attempt to get him to leave.

Sherman was issued a “3-Day Notice to Cure or Quit” claiming that his cat Mitz, also a long-term Embassy tenant and minor neighborhood celebrity in the pet-friendly building, was a “nuisance”. He was given the choice to get rid of the nuisance or vacate the building within three days.

Sherman and his partner and young daughter were also instructed not to talk or interact with guests or staff and their mailbox was removed from the premises, he explained.

A more pertinent incident occurred when Sherman hosted neighbor Laura Wilson and Charles Fine in his apartment for lunch. Bullying, threatening, and harassing Wilson and Sherman during the visit; including persistent phone calls, threats to call the police and stationing staff outside Sherman’s apartment, Sherman said he had no choice but to resort to the City Attorney’s office for help.

Sherman filed a Tenant Harassment case against Palihouse in July 2013, and won.

The owners paid punitive damages to Sherman and issued apology letters for their behavior, which is all that Sherman asked for, alongside a signed letter by employees that they would no longer harass Sherman and his family.

“You’re very difficult and you’re hard on the building,” he said that he was told.

Today’s article is the second in an investigative series. Neither Palihouse nor Santa Monica City responded to this week’s questions.