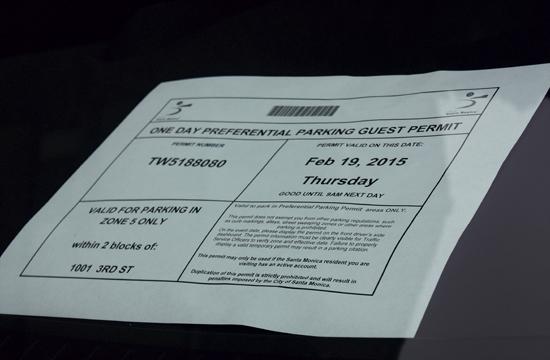 With a total 38 operational guest rooms, and a sizeable staff, Santa Monica’s Palihouse is having its impact felt on surrounding streets. Street parking is backed up for blocks surrounding the boutique hotel, as guests and staff fill available spots, often double-parking until a space frees up.

Part One – Investigation Palihouse: Santa Monica Neighbors Up In Arms

According to smgov.net, up to 25 one-day temporary permits can be issued each day per preferential parking tag, with a limit of 300 per year.

According to City documents, Palihouse is actually allowed to purchase 38 preferential tags, enabling a total of 11,400 temporary paper permits to be printed directly from the City website each year. That’s an additional 31 temporary permits per day, a maximum of 69 car spaces, per day.

Heading east on Washington Ave. to Fourth St., there is room for approximately 10 cars. Simple math reveals that with 69 possible passes daily, Palihouse effectively parks out the immediate neighborhood.

Standing on the corner for an hour or so each day, it is obvious for all to see that guests are not the only ones utilizing the parking permits and temporary guest permits. Several staff members can be observed parking their own cars (the same make, model, and registration for months on end), on the block and surrounding streets, day after day.

For neighbors, there is literally no room left for their own cars, let alone cars of visitors and guests.

This situation has been enabled by Section 3.08.070(d) of Santa Monica’s Municipal Code.

The category of preferential parking permit was adopted by Santa Monica City Council on July 8, 2003.

The structure that is currently referred to as Palihouse was landmarked in October 2003.

In 2003 Council directed staff to review preferential parking options for City-designated landmarks that provide overnight accommodations, according to the City.

“Although the Santa Monica Municipal Code prohibits the issuance of on-street preferential parking permits to any commercial use, at the time the law was adopted, the then recently adopted Historic Preservation Element (adopted in 2002 and still in effect) called for the development of new incentives for landmarking historic properties,” stated Salvador M. Valles, Acting Chief Administrative Officer, Santa Monica City Planning and Community Development.

The conclusion was that historic properties do not conform to off-street parking requirements and the lack of available parking was thought to compromise service to tenants, visitors and others who use or occupy historic properties and who depend upon automobiles for transportation and access, Valles said.

A late quote from the City states that, “The Palihouse currently has 15 Guest Parking Passes. These parking passes do not have the same privileges as Resident Preferential Parking. The City will work with Palihouse to ensure they are using the guest passes in the appropriate manner.”