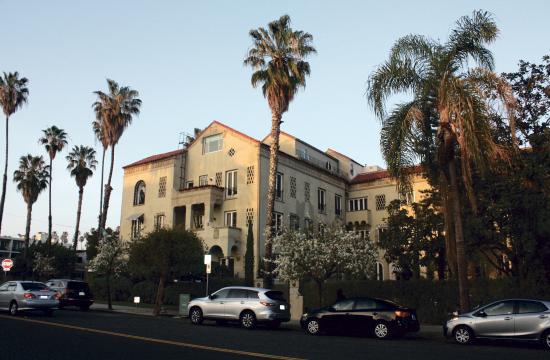 Recent outcries from angry neighbors surrounding the now boutique hotel Palihouse at 1001 3rd Street are raising serious questions in Santa Monica. With a surge in all-night noise, street parking, and outdoor parties, how did the residentially located apartment building become a fully operational hotel in mid-2013?

Leading the neighborhood charge of community complaints, Laura Wilson discovered that despite a change in business license in 2008, there is no legal evidence that Palihouse, then Embassy Hotel Apartments, was ever legally operating as a hotel.

“The massive change in character, use, operation, and occupancy from a very quite residential building, to a very noisy, full-scale 24/7 commercially operating hotel has significantly diminished the peace, quiet, enjoyment, and quality of life in my home and neighborhood,” Wilson said.

It appears that an arbitrary decision by City Council grandparented the property’s hotel status, yet there is little evidence giving credence to such a move.

The land use decisions that were made by City Council members at the time, upon recommendations by Santa Monica’s staff attorneys are absolutely shameful, said resident David Garden.

“The conversion of The Embassy Apartments from rent control warrants a thorough investigation by an independent outside investigator,” he added.

It was in 2008 when Santa Monica City business license records reveal a shift in the Embassy’s license from “Rental of Residential Units” to “Hotel, Motel or Auto Court,” dated Feb. 7 that year.

The claim that the Embassy Apartments is legally operated or occupied as a hotel is simply not true, Wilson said.

“After hour upon hours of research, I have significant evidence and can prove the residential status of The Embassy Apartments,” Wilson said.

In 1980, a request for an exemption from the Rent Control Board of Santa Monica by Embassy Hotel Apartments was denied, “due to the owner’s failure to present evidence that any units are qualified for transient occupation.”

A follow-up letter from the City on May 21, 1980, informed residents at the Embassy that then-owner Elis Nourafchan’s request for exemption claiming hotel/motel status was denied.

“The units in the Embassy Hotel Apartments are controlled rental units covered by the Rent Control Charter Amendment,” the letter stated.

On August 17, 1998, a letter was issued to Nourfchan to “cease any hotel type operation at the Embassy,” stating “It is clear the Embassy Hotel/apartments at 1001 3rd St., Santa Monica was authorized and approved for an apartment building.”

Nourfchan was given 30 days to remedy the situation.

In response to the letter, Nourfchan’s attorneys replied to the City with occupancy details revealing that 15 of their apartments had long-term tenants, 13 were rented by Getty for visiting artists and scholars, and a remaining 10 rooms were open for guests.

A settlement agreement in December 2000 between the property owners and the City of Santa Monica determined that 19 units were operating as hotel units and 19 units were rent controlled.

Subsequently in another Settlement Agreement entered into May 10, 2011, the remaining 19 rent controlled units were authorized for conversion into hotel units, with certain rent control conditions; “thereby enabling the full conversion of the building to a hotel use,” according to a City of Santa Monica Information Item dated June 21, 2013.

According to an email written to Laura Wilson by Santa Monica City Attorney Marsha Moutrie, despite the City issuing the letter to the Embassy in 1998 stating that it was not a hotel, “there was very substantial evidence to the contrary, which tended to show that the Embassy had operated as a hotel prior to 1995. Thus, the hotel use was grandparented pursuant to Municipal Code section 9.04.08.06.020.”

No such evidence has been provided by the City notwithstanding the numerous requests and published documents that indicate the contrary, Wilson explained. There are countless claims and much supporting evidence that Embassy was not legally operating as a hotel in 1995.

The only possible reference found to back up the City could be the 1995 overlay that protects nonconforming properties and legally existing hotels in the area during a rezoning from R4 to R3 in 1990.

However, while three hotels are mentioned in a Staff Report referring to the overlay, Embassy is not. It had a business license as Residential Units at the time and no notice was given to owners or tenants located near the Embassy about the rezoning. Notice was given to residents in and surrounding the Oceana Hotel mentioned.

Further to the point, Wilson explained, if the Embassy was included in the overlay, there are strict caveats limiting the expansion of the nonconforming properties covered to five percent, with no floor area increase.

“The City has been duped,” Wilson said, adding that she believes the City was trying to do the right thing by everyone at the time.

“Given the evidence and the law, Council decided to settle the dispute through an agreement that allowed half the units to be used as apartments and the other half as hotel units. This settlement protected the tenants and maintained the residential use of half the premises,” Moutrie wrote.

“However, years later, The Embassy filed suit to challenge the very settlement agreement which it had voluntarily made as illegal under the Ellis Act. The City opposed the challenge and prevailed in the trial court. However, the Embassy obtained a reversal on appeal. Since the appellate court ruled that the settlement was illegal, The Embassy is no longer required to maintain half of the units as apartments,” the city attorney wrote.

Thus, a hotel use on that property is not a zoning code violation (because the use is grandparented); and the 2000 agreement’s drafting did not cause “a breach”. Instead, the court ruled that state law prohibited the City from entering into any deal that abrogated The Embassy owner’s Ellis rights, according to Moutrie.

“Our hotel is not new,” added Ramin Kolahi, principal of Lighthouse Investments, owner of Palihouse. The group purchased the property in 2012. “We improved the quality of the hotel and rehabilitated an aging historic landmark,” he said. “We are proud of the many compliments we get from neighbors, guests and various travel magazines, including winning prestigious awards.”

The Palihouse situation has Santa Monica residents concerned about what’s to come.

“Palihouse Hotel is not just a mistake for the immediate area, but a danger of things to come,” commented resident Danielle Charney. “Straight through the Wilmont area, as well as all other beach areas, or areas near commerce, the loophole used with Palihouse is just one of which the City can start applying. The retrofit costs being passed on to the low income tenants is another one, in essence, if they want to clear out old rent control, this is a dandy way to do it.”

“The hotel is a festering wound for our small city. It should definitely be closed and converted back into rent controlled housing,” Garden said.

People cut loose while on vacation and their behavior is disruptive to residents, realtor Kate Bransfield weighed-in.

Concerned residents say they will continue to fight Palihouse’s classification and are committed to ensure the same situation is not repeated elsewhere.

Next week, meet the two remaining residents of Palihouse, set to be evicted in May, in The Mirror’s ongoing investigative series.