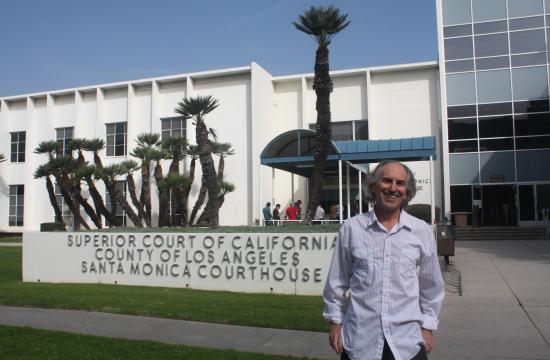 A long-term low-rent Santa Monica tenant has won a David vs. Goliath case against a local landlord attempting to evict him on breach of his 1991 rental contract.

Bills claimed that renovations and improvements Aron had made to his “as is” apartment in the course of his 24-year tenancy breached his lease, despite many of them occurring in the 1990s.

A 12-person jury found Wednesday, Feb. 4, 12-0 that Bills had waived her right to evict Aron and believed 12-0 that her attempt to evict was done with malice.

The result could have significant ramifications for tenants across the Westside, according to legal and community commentators.

“We are thrilled that the jury reached the correct result and saw the landlord’s pretext for this eviction,” commented Denise McGranahan, Senior Attorney with Legal Aid Foundation of Los Angeles.

A relieved and happy Aron said that he hopes his victory will deter lawyers and landlords pursuing tenants in this way in the future. While slightly hesitant about possible fallout from the case, Aron said that he’s “just hoping that the landlord will desist with this approach of intimidation and harassment.”

The landlord and her attorney trumped up a case against a long-term tenant who in good faith spent his own time and money to improve the unit, commented Sue Himmelrich, attorney with Western Center on Law and Poverty and Santa Monica Councilmember.

“I am so pleased that the jury saw the truth of this situation,” Himmelrich said. “The vast majority of landlords do not act like this. The minority that does, however, deserves to be sued for harassment, as the City is suing this landlord.”

The City of Santa Monica is currently pursuing WIB Holdings and Barbara Bills in court for three counts of tenant harassment.

The City’s case is based on claims that after several failed “buyout” attempts to coerce three of her low-rent tenants, including Aron, to leave, Bills illegally entered the apartments in question and bullied and harassed her tenants in an attempt to find anomalies or breaches in their contracts. The tenants currently pay $765, $765, and $714 per month rent respectively for their apartments, with other apartments in the block renting for $1,749 a month and market rents in the area fetching upwards of $1,900.

The case is indicative of the escalating number of tenant harassment issues on the Westside according to city councils and Los Angeles-based attorneys.

The topic headed the agenda at the recent Westside Mayor’s Forum with Santa Monica, Beverly Hills, Culver City, and West Hollywood all facing an increase in tenant harassment calls.

A combination of rapidly escalating market rents and development is spurring the increase in the number landlords keen to kickout affordable housing tenants with the very real case of quadrupling their incomes in the long-run, according to McGranahan.

Landlords are willing to part with thousands of dollars to evict their tenants, the senior attorney explained, as the economic windfalls are worth it.

Landlords offer tenants packages up to $40,000 to leave their apartments, and while the money sounds like a lot to begin with, it is quickly absorbed if tenants want to stay on the Westside.

When tenants refuse such buyouts, the situation can get ugly, according to local attorneys.

“It’s very difficult to prove these cases,” McGranahan said, explaining that some landlords retain expert witnesses and specialized legal council and are often intent on making “life hell” for the tenant until they relent and move out.

The City of Santa Monica revised their Tenant Harassment laws late last year in an effort to combat the issue.

“Harassing inspections and invasions of privacy are now prohibited, and we’ve created a process for lease buyouts that requires they be in writing, with full disclosure of tenant rights, filed with the City and subject to a 30-day period for reconsideration,” explained Santa Monica Mayor Kevin McKeown.

An increase in the number of calls to City authorities spurred the motion, with rising market rents giving landlords growing motivation to pressure existing renters out, even when there are no legitimate grounds for eviction, he explained.

“Rent checks mysteriously go missing; repeated intrusive inspections include photographs of tenants’ private lives; offers to buy out the tenancy are coupled with threats of possible use of the Ellis Act, even though the landlord has no real intent to shut down the entire building as that state law would require,” McKeown said.

In Culver City, the issue of rapidly rising rents is causing tenants to move away from the Westside. Tenants are reporting rent increases of 45 percent with 60-days’ notice of a new owner, according to tenant feedback on culvercityrentcontrol.com.

“Landlords in older buildings subject to rent control want to evict older tenants with lower rents and re-lease them at market rates,” said Himmelrich. “This is a problem in rent control jurisdictions throughout California because of Costa-Hawkins, which allows for vacancy decontrol.”

While city laws and regulations are being improved, and Aron’s win may pave the way for future cases, McGranahan said that tenants need to be careful in everything that they do.

“Keep really good records on interactions with landlords, have witnesses present on inspections and think ahead,” she advised. “Pay rent on time, and no renovations without written permission.”

Calling for more legal resources to assist tenants, “people need to realize that they have bulls-eyes on their back if they are in a rent control apartment and they need to seek help right away and not be intimidated,” McGranahan said.