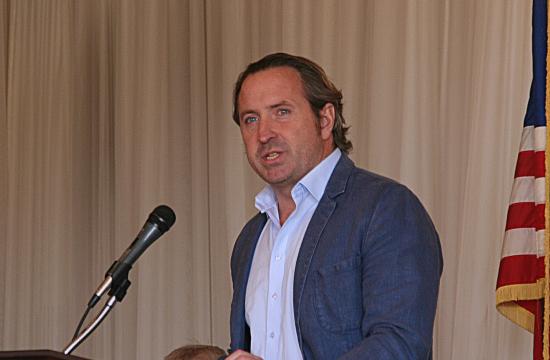 At the Jan. 30 Santa Monica Rotary Club meeting, Rotarians and guests had the opportunity to listen to a unique musical performance by Rex & Friends, a vocal/music group that has formed as a non-profit corporation, the Rex & Friends Foundation.

According to musical director Sam McElroy, Rex & Friends serves to introduce music as an “alternative avenue of communication” that can ultimately provide a pathway for an autistic mind to help bridge the gap that may hinder interconnection.

As an international opera singer himself, McElroy first explained the potency of music before Rex & Friends took to the microphones.

Since music can offer “important cognitive, emotional, and social benefits,” Rex & Friends provides music therapy or education for blind and/or autistic individuals in the Southern California area. Rex & Friends is able to make accessible certain forms of music education and therapy by creating personalized development plans with the individuals themselves.

The roots of the program trace back to Rex Lewis-Clack, who was diagnosed with autism as a toddler and then proceeded to be deemed as a musical genius as a pianist at seven years of age.

As one of only 50 known individuals throughout history to be able to fuse blindness, autism, and musical skill, Lewis-Clack has been recognized through various television programs and prestigious awards.

Upon meeting and receiving private tutoring sessions from McElroy in 2008, the story of Lewis-Clack began to spread even more widely as the mission to “raise awareness of the transformative power of music” became more emphasized.

Rex & Friends formed in 2012 as a nonprofit public benefit corporation and remains a charity that relies on donations to fund its operations, such as awarding grants to autistic musicians in order to support musical collaborations with such artists in professional studios.

Lewis-Clack, alongside a handful of similar vocalists and musicians, performed four songs for the Rotary Club of Santa Monica. Lewis-Clack performed both as a vocalist and as a pianist, personally introducing each and every song before the group began a new tune.

The performances featured all of the makings of a choir, with different vocal parts and musical instruments incorporated into the music. The Rotarians were able to witness how music has the potential to release certain “floodgates of other underdeveloped areas of the mind,” despite former cognitive restrictions.