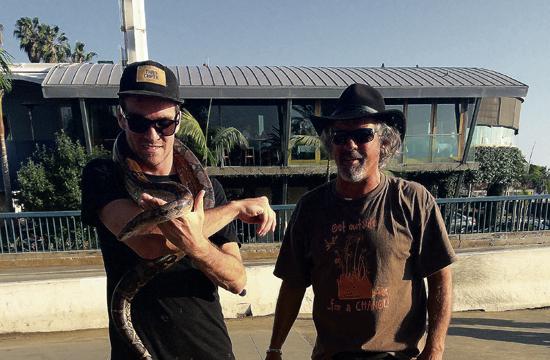 The sprawling “circus” of individual exotic animal handlers that can be found near the Santa Monica Pier entrance in Palisades Park have been told to pack up and leave permanently after an ordinance to ban them from exhibiting their snakes, reptiles, birds, and non-human primates was passed Tuesday – despite pleas from animal handlers for the City to work with them on finding middle ground.

City Council voted 6-0 in favor of the ban, Councilwoman Gleam Davis was absent, after hearing from about two dozen speakers, the majority of which urged the Council to pass the ban. The ordinance bans exotic animals from all City parks and sidewalks adjacent to the parks, beaches, Oceanfront Walk, the Pier and Pier ramp, Third Street Promenade, and Transit Mall.

The ban will go into effect after 30 days of the passing of the ordinance’s second reading at next council meeting, which is scheduled for March 17. City Council voted on Tuesday to cancel its March 10 meeting due to an anticipated lack of quorum.

Karen Ginsberg, director of Community and Cultural Services, presented the first reading related to exotic and wild animals in Santa Monica. The ordinance was a result of numerous complaints regarding the presence of various wild and exotic animals in city parks, particularly in Palisades Park.

Ginsberg’s three-point presentation at the City Council meeting outlined concerns for safety, crowding, and treatment of the animals. Issues with the exotic animals and their handlers ranged from aggressive enticements to spectators spilling onto the busy intersection at Colorado and Ocean Avenue.

“We do have documented injuries to patrons, most recently on August 2014 a police report was filed when a young girl was pecked in the face by one of the birds,” Ginsberg said.

Concerns about the perceived inhumane treatment to the animals, from prolonged exposure to the sun to loud noises from an urban environment, were also raised.

In response, several Palisades Park animal handlers and admirers of the animals spoke in favor of regulations on the animals instead of eviction.

“With 15 years of handling reptiles, reptiles are my profession,” Pier animal handler Jesus Tapia said. “Please don’t ban us; work with us. Allow us to be part of your community. We’re up to permits and have liability insurance if anybody were to get hurt.”

Tapia and others opponents to the ban added that the animals get breaks, sufficient water, are transported in enclosed bags for their own safety, and are protected from the sun with umbrellas.

Howard Kaminsky, self-proclaimed “Bird Man of Santa Monica,” implored the Council to consider the amazement people get from interacting with the birds and reptiles.

“This is what I do for a living because it bring people great joy, which brings me great internal joy and personal satisfaction,” Kaminsky said.

Dr. Heather Rally, a licensed California veterinarian specializing in captive wildlife with the PETA foundation, spoke in favor of her hometown banning such animals. Rally noted that exotic reptiles and birds are among the most frequently exploited species for monetary gain. And although these animals can become habituated, she said, they will never become domesticated.

Both the Recreation and Parks Commission and Pier Board sent letters to the Council in support of the ordinance.