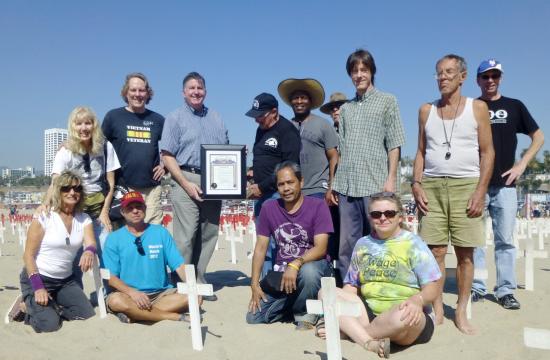 Santa Monica Mayor Kevin McKeown presented a City of Santa Monica commendation on Sunday to organizers of Arlington West, the weekly war memorial installation on the beach just north of the Santa Monica Pier that is marking its eleventh anniversary.

Every Sunday at dawn, dedicated volunteers install rows of hand-fashioned wooden crosses, stars of David, and crescents in the sand in a configuration resembling the Arlington National Cemetery, the nation’s burial place of honor for war heroes.

Mementos now numbering in the thousands placed by families and friends of the adorn many of the markers.

Members of Volunteers for Peace and volunteer supporters are devoted stewards of these photos, souvenirs, and heartfelt written notes, carefully preserving them and positioning them on the markers, which are set in the sand at dawn and taken down at dusk.

Presenting the commendation at the memorial on Sunday to Michael Lindley, Ed Ellis, and Kathleen Hernandez, who have been with Arlington West from the start, Mayor McKeown told the dozen Veterans for Peace members and volunteer supporters that “your volunteer commitment over 11 years has done Santa Monica a great service, providing an inspiring place for visitors from all over the world to remember, to grieve, to comfort each other, and to learn.”

Once the installation grew to where it became too physically extensive, red markers, each of which represents ten fallen soldiers, have been used in place of some of the individual white markers, a practical measure that itself speaks eloquently of the relentless piling up of lost lives.

From the start, the installation has also acknowledged and documented the deaths and injuries, military and civilian, on the other side, in fulfillment of its mission to provide a place of recognition of and meditation on the human costs resulting from using military means as an instrument of international policy.

Every Sunday, volunteers begin setting up the installation at dawn, tend it throughout the day to welcome the throngs of visitors from all over the globe, and take it down at dusk, a massive job done every week, rain or shine.  More volunteers are needed and always welcome.

For more information about Arlington West Santa Monica, Veterans for Peace, and the human costs of war, visit www.arlingtonwestsantamonica.org.