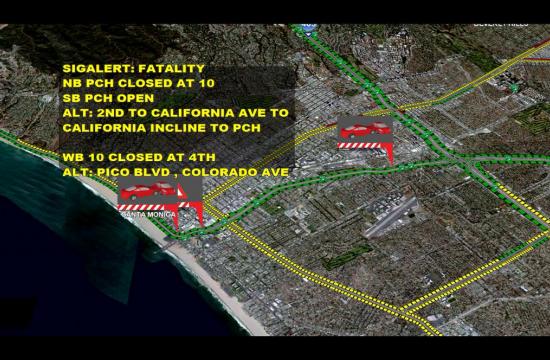 The California Highway Patrol said the body of a man was found in the 1200 block of Pacific Coast Highway around 3 a.m., with the investigation closing PCH in both directions and the 10 Freeway lanes at Fourth Street.

Santa Monica police Sgt. Mike Boyd said police were investigating whether the man’s death was a result of a traffic accident, a fall or a suicide from the nearby bluffs.

A SigAlert was declared by the CHP at 3:39 a.m. All lanes of the 10 Freeway and PCH were cleared and reopened at 8:05 a.m., according to CHP Officer Jennifer Cassidy.

CBS2 reported police secured a perimeter near a pedestrian overpass located near Wilshire Boulevard, and also on top of the bluff.

According to CBS2, a preliminary investigation revealed a commuter reported seeing a shoe in the road. When the driver took a second look, they spotted the dead body in one of the lanes.