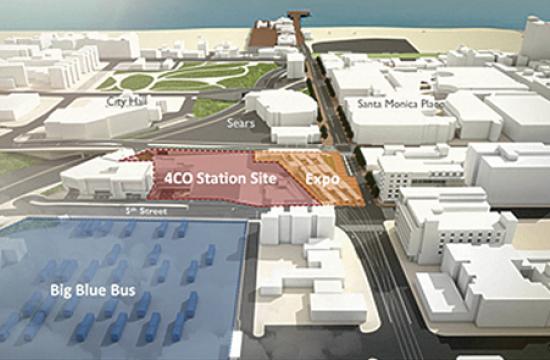 Concept design on the interim use of the future Colorado/4th Street and Colorado/17th Street light rail station sites were approved by Santa Monica City Council Tuesday, with work expected to start in the near future.

City staff was directed by Council late November to provide a short-term solution for the 4th Street Colorado site that will be in place during the ongoing analysis and outreach of a long-term vision.

Staff suggested a phased upper and lower lot plan for the Colorado site that allows for the upper lot to be functional on opening day and remain in place as a potential swing space if the lower lot were to be used for temporary events was developed.

The phased plan consists of:

• Site development footprint that includes both the upper and lower lots.

• Necessary grading to create a vehicle ramp from 5th Street to the lower lot and provide ADA access between the platform, handicapped access ramp and the locations for para-transit vehicles.

• Removal of up to four metered parking spaces along the west side of Palm Court.

The option is estimated to be constructed in two phases so that on completion of the first phase, the upper lot will be completed to provide two shuttle spaces and six kiss-and-ride spaces by opening day, City staff said.

The lower lot and access ramp would be completed in Phase Two approximately five-seven months later.

The estimated construction cost for this project is approximately $2 million. The option is a considerable drop in spending compared with the initial $6.6 million plan presented to council late last year.

The cost savings will be found by significantly reducing curbs, sidewalks, islands, and landscaping in comparison to other options, according to the City, utilizing primarily asphalt sidewalks and paint to identify circulation paths of travel with paint and removable plastic delineator posts, truncated domes, k-rail, etc.

The 17th Street/SMC Expo Station and 16th Street redesign was also approved by Council Tuesday with preliminary measures providing kiss-and-ride and shuttle areas and additional parking resources prior to the opening of the light rail station.

Parking includes metered parking as well as short term parking for drop-off and loading. Transit drop-off and kiss-and-ride zones will be provided on the northern half of the east side of the street to serve Metro rail patrons.

The remaining curb space on the east side of the street will continue to serve on-street parking for the adjacent businesses. Curbside parking and loading yield will be effectively increased by approximately 50 percent.

Construction is scheduled for spring this year and will be coordinated with the annual repaving program, not incurring additional expenses.

Council approved City staff’s request to release $700,000 of the fund balance from their reserve account to enable the initiatives.