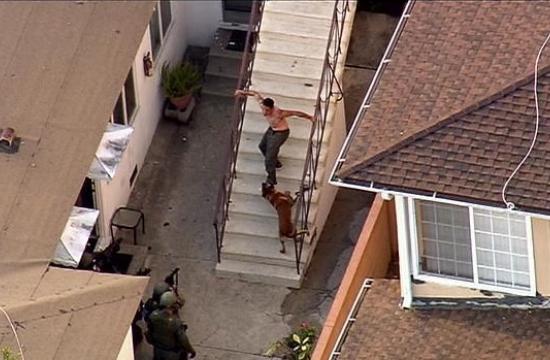 A suspect wanted in connection with a man’s fatal stabbing barricaded himself inside a Santa Monica apartment for more than five hours on Saturday, prompting evacuations of nearby residences as a sheriff’s special weapons team backed by an airborne unit sought his surrender.

The special weapons team was dispatched to an address in the 800 block of Ocean Park Boulevard, near Lincoln Boulevard, at 12:32 p.m. to assist the sheriff’s department’s Major Crimes Bureau with the barricaded suspect, according to the Los Angeles County Sheriff’s Department.

The suspect, whose family members told a reporter at the scene is a man in his 20s, was taken into custody about 5 p.m. after he emerged shirtless and limping down an outdoor stairway, a police dog biting at one of his legs.

“The situation concluded after tear gas was deployed into the location,” Deputy Grace Medrano of the Sheriff’s Information Bureau said. “As the suspect began to exit the location, he attempted to return back inside when the Special Enforcement Bureau K-9 was deployed. The K-9 was able to control and bring the suspect to awaiting deputy personnel with no further incident.”

The man was wanted in connection with a homicide about 4:10 p.m. on Feb. 10 in the 8000 block of Vermont Avenue in an unincorporated area near South Los Angeles, Medrano said.

The sheriff’s department had reported shortly after the killing that a man was fatally stabbed at that time and location. Victim Wesley Morejon, 30, died at a hospital, according to coroner’s Assistant Chief Ed Winter, who said the man was injured in the 8900 bock of Vermont Avenue.

According to sources at the scene of today’s standoff, roads were closed in the area as a sheriff’s helicopter orbited low, emanating orders for the man to surrender.

A couple that lives in an apartment below the one where the suspect was holed up told a reporter they heard orders being shouted for the suspect to surrender between 11 and 11:30 a.m.

They called authorities and were first told to shelter in place before later being told by deputies to clear out of their apartment, they said.

Santa Monica police and fire paramedics were stationed nearby in a support role as the standoff played out.

Emmy-winning actress Dana Delany, who lives in the neighborhood, wrote on the social media website Twitter, “The Sheriff & SM Police did an excellent job. 3X they warned him to come out. Then came the gas. After that, the dog went in. The SWAT team brought him out hopping on one foot because the dog bit the other.”

Delany, who received outstanding lead actress in a drama series Emmys in 1989 and 1992 for her role as nurse Colleen McMurphy in the ABC Vietnam War drama “China Beach,” described the suspect as a “skinny dude with no shirt and all red from the gas.”

Delany tweeted that her favorite story from the standoff “was a guy who was hungry & pulled over to eat his burrito.”

“Cops told him he had to leave his car and move away from area. So he was stranded for hours. Moral: eat when you get home.”