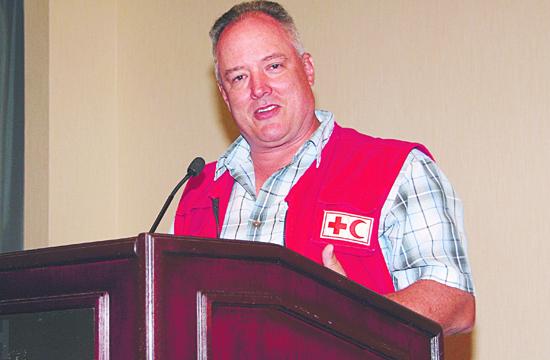 There are few people in this world as well traveled, well informed, and as brave as Steve McAndrew. As the head of emergency operations for the International Federation of the Red Cross, he works globally on all sorts of projects. When he’s not out in the field, which he is 50 to 75 percent of his year, he’s mentoring, training, and working on policy development. Lately he’s been in Sierra Leone, in the middle of the biggest Ebola outbreak the world has yet to see.

McAndrew has been adventurous his whole life, but started out just like any of us. His parents were from the Jersey shore, and he grew up in Philly, playing street hockey with his friends, couch cushions strapped to his body for protection. As an adult he did construction, brick and mason.

At 28, things started to get more interesting. He joined the Peace Corps and flew off to Honduras to build water systems.

“This is where I learned to be humble,” he said.

How could he not, when next thing he knew, he was in the middle of Hurricane Mitch, a major hurricane that hit Central America (particularly Honduras and Nicaragua), the Yucatan Peninsula, and South Florida, killing more than 19,000 people.

From there, McAndrew joined the Red Cross as a volunteer, where they trained him for international response. He went to India first, and then learned about food aid in Africa. “This is where I learned to listen,” McAndrew said.

Eventually McAndrew made his way up the ladder, and got the title he has today. As head of emergency ops internationally, he helps to organize the Red Cross’ 187 national societies. And as noted earlier, his latest heroic endeavor has been to help with the Ebola outbreak in West Africa.

McAndrew said that Ebola is sweeping around Africa at great speed, the worst hit being Guinea, Liberia, and of course Sierra Leone where he has been helping. This incredibly infectious malady has also taken a toll on Nigeria, Senegal, Mali, and Spain, even limited cases in the UK and here in America. There have been 23,337 cases, and 9,442 deaths so far.

“The world is having to adjust,” McAndrew said. “We have seen Ebola before, but this is the largest and longest issue with it that the world has faced. It starts in one place, rapidly moves around, often ending up back where it started, and all the while we are chasing it.”

There is no known cure for Ebola, but McAndrew said that there are a few different ways to battle this disease, including treatment, safe and dignified burials, surveillance and contact tracing, social mobilization and communications, and psycho social support.

As far as medical treatment goes, there’s only so much they can do. They can give a patient pain killers, hook them to an IV, hydrate. They think that they can increase survival by quicker treatment, but aren’t sure. They’ve noted that kids who drank coconut milk seemed to recover better, but this is also mere hypothesis.

By getting a person to a hospital, they can provide that other illnesses or injuries are treated, which likely helps, but there is still no cure for Ebola. Whether there was a cure or not, some would never turn to western medicine anyway.

With seldom a doctor to be seen, many turn to natural healers. Unfortunately, unless those healers are educated, they can be part of the problem, getting the disease and then passing it around to all their patients.

McAndrew said that the thing is to have hospitals up and running with 24/7 staff, in locations out of town, and to make sure that those running the hospitals are doing it safely and securely. This is hard when at every turn there is the possibility of infection. The suits they wear to protect against this disease are great, but only if you use them correctly. There are many steps to getting into, and especially out of, these terribly hot suits. You miss just one step, and you are going to get it.

As you can see, there are so many things to think about when it comes to Ebola. McAndrew says that the response isn’t so much about money, though that helps, too. It’s really about volunteers and workers jumping up to help. Steve McAndrew has certainly been doing his part.