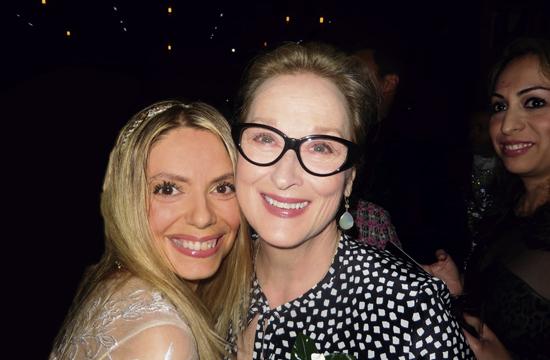 Oscar Week, as always, is a time for Hollywood’s best to not only accept awards, but to share on the recent year’s activity, as well as the possibilities in the year ahead.

Santa Monica’s own Marie Paquim, creative producer, actress and writer for Utopia Lumiere Films’ upcoming film project “Land of the Free, Except for Me,” was no exception, and she dove full bore into the week’s activities.

Paquim walked the red carpet along with her mother, renowned Portuguese fado singer Lisette Paquim, at the 30th annual Spirit Awards, held on Saturday, Feb. 21, next to Santa Monica Beach.

Paquim attended the awards as a member of Film Independent’s “Arts Circle,” which sponsors the organization’s yearlong activities, from the Los Angeles Film Festival to the Spirit Awards.

Lincoln Motors, one of the events sponsors, interviewed Paquim along with others by asking the question: “What does ‘Lincoln’ mean to you?”

Paquim noted that ironically she has a Lincoln car written into her movie “Land of the Free, Except for Me.” But she also said “Lincoln” meant for her “freedom” and “independence,” which are the same things she thinks the Film Independent organization stands for.

Paquim’s day at the Spirit Awards got even more interesting, as her friend, writer/director Dan Gilroy, won Best First Feature and also Best Screenwriter awards for his film “Nightcrawler” that stars Jake Gyllenhaal.

Others in attendance were Alfred Molina, nominated for Best Supporting Actor for “Love Is Strange,” Oprah Winfrey, producer for “Selma,” and Michael Keaton, who won the Best Male Lead award for his work in “Birdman.”

Best Picture award went to Alejandro González Iñárritu, also for “Birdman”, and the Best Director nod went to Richard Linklater, who truly pushed the envelope for independent filmmakers by making his film “Boyhood” over a 12-year period.

The day prior, Paquim attended Women In Film’s event, where women filmmakers were celebrated for their extraordinary work this year.

Among the attendees were Meryl Streep, Best Actress nominee for “Into The Woods,” who graciously shared a moment with Paquim (who she instantly recognized from one of Paquim’s films from her teenage years), and former Oscar winner Jennifer Hudson, who gave a rousing speech in support of keeping the artist’s dream alive.

In all there were 42 women Oscar nominees, and they shared a proud moment to bask on stage before the flashing lights of the cameras.

Also in attendance was actor John Savage, an outspoken critic against human trafficking, who made a special point of extending his support to Marie Paquim, and her brave autobiographical film project on the subject, “Land of the Free, Except for Me.”

Rumor has it he might become attached to the project.

The night before the Oscars saw one of Hollywood’s biggest parties at the FOX Lot’s The Motion Picture Television Fund’s “Night Before Party” in Century City (a change from its usual location in Beverly Hills).

Paquim gave her best wishes to actress America Ferrera and director Dean DeBlois, for their nominated animated film “How To Train Your Dragon 2,” and also took time acknowledge the work of others in attendance, such as veteran actors Andy Garcia and Kyle MacLachlan, who she gently teased that he was her childhood crush.

Hollywood’s weeklong party finally culminated on Oscar Night, but the dreams of filmmakers like Paquim, and all the winners, nominees, and other participants, is only beginning for this young 2015. We can only guess what dreams are yet to be imagined and accomplished.