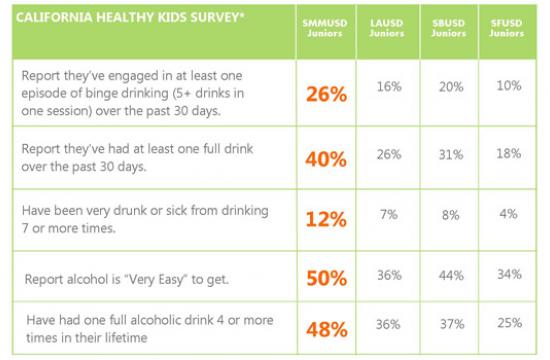 The Westside Impact Project, an LA County-funded initiative started in 2013 to lower Santa Monica’s rates of underage drinking, said Tuesday latest data reveal gaps in the quantity and frequency of alcohol use among Santa Monica-Malibu Unified School District (SMMUSD) students as compared to LAUSD students, as well as compared to other major California school districts, including Santa Barbara and San Francisco.

A comparison of the most recent California Healthy Kid Survey (CHKS) findings indicates that SMMUSD leads the Los Angeles, Santa Barbara and San Francisco school districts in several key categories, including the incidence of binge drinking over the previous 30 days, the percentage of students who report consuming multiple full alcoholic drinks in their lifetime, and the percentage who report they have been “very drunk” or “sick” from drinking alcohol.

There are also disparities in students’ reporting of how easy it is to obtain alcohol – 50 percent of SMMUSD students say alcohol is “very easy” to get, as compared to 36 percent of LAUSD students and 34 percent of SFUSD students.

The California Healthy Kids Survey (CHKS) is a tool utilized in Grades 5-12 by schools and districts across the state to accurately identify students’ and schools’ strengths, weaknesses and areas of need.

“Underage drinking is a national problem, but it’s concerning that SMMUSD’s numbers are consistently higher than other California school districts across every measure, from lifetime use of alcohol, to past 30-day use, to ease of access,” said Trisha Roth, a 15-year Santa Monica resident, pediatrician and Chair of Substance Abuse for AAP, including Los Angeles County. “Underage drinking exposes young people to range of dangers, not the least of which is drinking and driving. We should be taking this seriously as a community.”

According to representatives from the Westside Impact Project, Santa Monica’s high numbers could be fueled in part by the city’s high density of alcohol outlets.

“Santa Monica is a hospitality-oriented beach city, and for that reason, it has a high volume of bars, restaurants and liquor stores,” said Sarah Blanch, Manager of the Westside Impact Project. “That can lead to lots of exposure and casual attitudes about alcohol, which are correlated to increased underage alcohol use.” One way to mitigate these problems is through good business practices and regular law enforcement compliance checks that deter sales to minors.

However, according to the Project, the primary source of alcohol for Santa Monica teens are social sources, such as home parties. In focus groups conducted last December by Harder & Company, an independent evaluator, Santa Monica youth cited “friend’s homes” and “parties” as the places alcohol was most commonly consumed.

The focus groups were hour-long sessions with 14 Santa Monica youth aged 12-18, during which the students were asked qualitative questions about their experiences with alcohol. Overall, the focus groups concluded that regardless of age, Santa Monica youth had a “very relaxed attitude” about alcohol use and that alcohol was “very easy” to access, particularly at home parties.

According to Westside Impact Project representatives, tactics do exist for reducing youths’ access to alcohol at such parties. Social host ordinances, which levy an administrative fine against the hosts of underage drinking parties, are one such tool.

Social host laws have been implemented in 25 major California metropolitan areas, and research indicates the laws may have a deterrent effect. A 2012 evaluation of the Ventura County law concluded that Ventura County youths’ 30-day usage rates were declining, as were party sizes.

“Social Host is being adopted by a number of cities not just in California, but across the country, and the data is out there that it effectively deters underage drinking parties,” said Ms. Blanch. “It might make a difference for Santa Monica. Our Project’s only goal is to keep Santa Monica’s youth as safe and healthy as possible.”

For more information about the Westside Impact Project, visit www.westsideimpactproject.org.