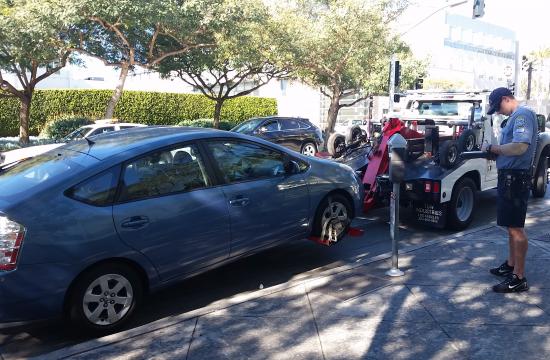 Recent changes in parking enforcements along Olympic Drive between Main and Fourth streets in Santa Monica are seeing a number of cars towed away each afternoon.

City officials say that they’re doing everything they can to alert the public, but The Mirror has observed people on a handful of different days simply not reading the signs and getting towed.

Clearly marked with a red “No Stopping, 2 P.M. to 5 A.M.” sign, sporting a clear picture of a car being towed by a truck, the new signs on the short stretch of Olympic Drive, installed October 2014 according to the City, are not deterrent enough for people looking for a convenient place to park.

The City has also attached a small label on the parking meters on the stretch that read: “Notice: Meter Day/Hours have changed. Please see posted signs for changes.”

Despite the warnings, an average of three to five cars a day are towed, according to Santa Monica parking enforcement and tow-truck drivers on the scene. A situation that is a costly exercise for those involved.

If caught overstaying your welcome, the Santa Monica City parking fine for the time violation on Olympic is $64. Your car then gets towed. It costs you a $131 administration fee at Santa Monica Police Station to get release papers for your vehicle. You will also have to pay any outstanding fines on your car before release papers are issued. Santa Monica tow truck companies will charge you an average $220 for the first day that your standard car is impounded on their lot, then $50 per day onwards. If you need to access the tow yard after 6 pm, add an average $85 to your bill.

If you arrive to your parking spot to find your car lifted on the back of a tow truck, you can expect to pay a drop fee of between $85 and $170 to have it released on the spot. You will however, still have to pay the $131 and $64, and you must have ID that matches your credit card, or you will be towed, regardless.

So, facing fines reaching $500, officials say that it pays to read the signs.

The tow truck drivers at Olympic explained that they try to give people as much time as possible, and that often it’s drivers with “disabled” signs who get caught out as they are used to parking everywhere without consequence.

The “No Stopping, 2 P.M. to 5 A.M.” on Olympic Drive between Main and Fourth Streets was instituted to create a new travel lane during peak travel hours to alleviate traffic congestion on Olympic Drive, according to the City.

“This extra lane was needed because the extension of Olympic Drive is heavily used as a connector between Ocean Avenue and Fourth Street, as well as the 10 Freeway,” City staff said.