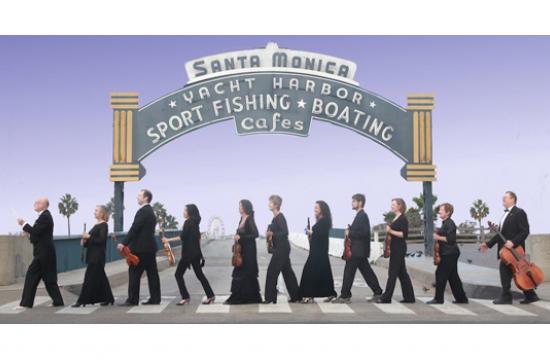 Santa Monica-based Agensys, Inc. and Wells Fargo Advisors showed their community support and love of the arts with a generous donation of $5000 each to Orchestra Santa Monica (OSM).

Agensys is the event sponsor for the orchestra’s April 19 concert and Wells Fargo Advisors is sponsoring OSM’s final concert of the 2014‑15 season on May 17.

“We are excited about Orchestra Santa Monica’s continuing growth and popularity,” said Wolf Noe, Vice President, Technical Operations at Agensys, Inc., a Santa Monica based cancer research company. We greatly appreciate the dedication of OSM’s musicians and the cultural contribution they make to Santa Monica. Agensys is pleased to sponsor April’s ‘Border Crossings’ concert, with Latin American and Chinese cultural influences so significant in Santa Monica and beyond,” he concluded.

“I am so pleased that Wells Fargo and Company shares my enthusiasm for the great work of Orchestra Santa Monica,” said Susan G. Inwood, Managing Director – Investments, Wells Fargo Advisors, LLC. “It’s an honor and joy to hear the orchestra and their incredible musicians successfully expanding classical music in our community.  In giving back to the communities it serves, Wells Fargo Advisors is committed to investing in creative expression and making Santa Monica a vibrant place for arts and culture.”

The May concert, ‘A Forward Look Back’, looks back to the 18th century for forward-looking pieces by Tchaikovsky and Brahms.

Orchestra Santa Monica is in its third season of offering the highest quality symphonic concerts of both traditional repertoire and new music. OSM is helmed by Conductor and Music Director Allen Robert Gross who has received worldwide recognition for his imaginative and probing interpretations of standard and contemporary orchestral repertoires.

The two final concerts of the current season will be at the Moss Theater on the campus on New Roads School in Santa Monica.

Orchestra Santa Monica’s recent move to the acoustically superb and visually engaging Moss Theater was very well received by audience members who attended their first concert in this venue in January.

For more information or tickets, call 310.525.7618 or visiting www.orchestrasantamonica.org.