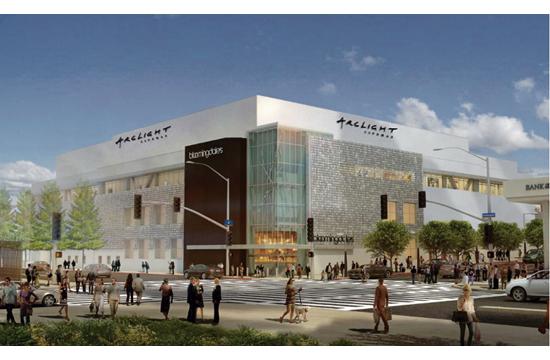 Passersby on 4th and Colorado have keenly been observing the increasing skyline of Santa Monica Place as exteriors are near completion for ArcLight’s latest location.

The new cinema complex will feature signature amenities that movie-lovers enjoy, according to the company, “including a wide range of unique programming, “black box” auditoriums, reserved seating, a commercial-free environment, and extra-wide stadium seats.”

“Right now, we are focused on the opening of The Santa Monica Place theater and we are very pleased with how the development is progressing,” said Gretchen McCourt, Executive Vice President, Cinema Programming, ArcLight Cinemas.

“We felt the city needed a place where moviegoers can immerse themselves in film and see unique programming that ranges from independent films to retro-screenings to favorite classics…We are eager to bring the ArcLight experience to Santa Monica Place and feel it will be terrific new addition to the city,” she said.

Santa Monica City Council approved the development agreement to bring the ArcLight complex to the Bloomingdale’s building at Santa Monica Place in April 2014, making it the first cinema complex to be built in the City since the 1980s.

The complex took over a vacant space on the third level of the building. The 10- to 13-screen space can accommodate an estimated 1,500 moviegoers, City staff stated. The height of the building was approved to increase from its current 56 feet to somewhere between 78 and 84 feet.

ArcLight Cinemas has also proposed a second potential movie theater only a couple of blocks away from the current development that could be larger if negotiations go as planned.

According to City staff, a second, freestanding ArcLight Cinemas, located at 1320 4th Street, could house between 12 and 16 cinemas and maintain a capacity of up to 2,700 people. City staff also stated that the second theater would also have street-level access and at least one IMAX-style screen.

If ultimately built, ArcLight Cinemas on Fourth Street would not exceed the 84-foot height restriction, according to the City.

Construction on the 4th Street ArcLight could begin either in 2016 or 2017, depending upon council approvals and entitlement processes.

With exclusive negotiations unanimously approved by City Council, a project team is working on developing conceptual designs and seeking community feedback on those concepts. Once feedback is received and incorporated into the design plans, City officials and the developer will perform an environmental analysis on the project.

City staff stated the project must beet the criteria and standards of the Downtown Specific Plan.

The plan to bring a pair of ArcLight Cinemas to Downtown Santa Monica followed the closure of a movie theater on the Third Street Promenade and a failed attempt to bring a new AMC multiplex to the area.

During the April 22, 2014, City Council meeting, staff stated that movie-going attendance had dropped by 55 percent between the 1990s and 2012 in Santa Monica, compared to just 11 percent during the same period nationwide.