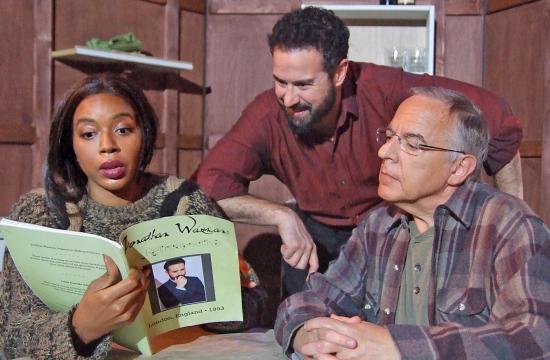 Playwright Donald Margulies is a writer with issues to explore. In his play, “Sight Unseen,” presented by Wasatch Theatrical Ventures, he delves into questions of what constitutes art as well as the slippery slope of love, commitment, bigotry, and the loss of creative purity.

Originally commissioned by South Coast Repertory in the early 90s, the play went on to New York where it received an Outer Critics Circle Award for the Best Off-Broadway Play. Laura Linney starred in that production and won nominations for a Tony and Drama Desk Award.

Coincidentally, Linney is currently in Los Angeles where she is starring in “Switzerland” at The Geffen Playhouse.

Divided into eight scenes that move back and forth in time, the non-linear story revolves around three principal characters – Jonathan Waxman, well played by Jason Weiss, his ex-girlfriend Patricia, wonderfully portrayed by Sameerah Luqmaan-Harris, and her husband Nick, played by Mark Belnick.  Grete, an obnoxious German journalist, rounds out the cast and is played by Casey McKinnon.

Jonathan is a celebrated “bad boy” artist who has come to London for his first international exhibit. It turns out that his ex-girlfriend Patricia (Pat), who he hasn’t seen in fifteen years, is married and lives in a run-down farmhouse in a village outside of London with her much older British husband Nick.   Jonathan had contacted Pat to let her know that he was going to be in town and received an invitation to spend the evening with she and her husband.

Jonathan and Pat were young lovers when he was an emerging artist and she acted as both his muse and model. He got a lot of flack from his late mother because not only was Pat not Jewish, she was also African-American. Eventually, following the death of his father, he broke up the relationship and a heartsick Pat fled to England to get over him. Pat refers to herself as “the sacrificial shiska (non-Jewish girl).”

Pat and her husband are both archeologists involved in what for them are exciting excavations that have resulted in the discovery of very ancient artifacts, but not much remuneration. Fully aware of what transpired between Jonathan and Pat, Nick is less than friendly towards his guest, taking every opportunity to subtly and not so subtly demean his work.

Still fighting some of his old demons, despite all of his success, Jonathan is racked with guilt for not being a good son and never received the praise that he desperately needed from his now deceased father, who he “buried under the unisphere in Flushing, Queens.”

Margulies cleverly uses the theatrical device of flashbacks. Moving back and forth in time, he illuminates the early loving relationship between Pat and Jonathan, as well as the ensuing conflict he faced in dating a non-Jewish girl.  He finally ends the relationship in a most heartless way.

Under the excellent direction of Nicole Dominguez, the action moves at a brisk pace and little by little the storytelling reveals that Jonathan is now married and lives in New Paltz, a small city 81 miles outside of New York and is about to become a father for the first time. Obviously painful to see him again, Pat pushes him as to why he’s visiting. He says he wants to apologize for his behavior to which she says that she’s, “Willing to feed him dinner and give him a place to sleep, but no forgiveness.”

In the meantime Nick takes extreme pleasure in denigrating Jonathan’s art, questioning the yardstick he uses in placing a value on his paintings, which apparently sell for tens of thousands of dollars. He is fully aware that Pat still thinks about her former lover and it seems that trashing his work is his only way of getting even. He refers to one particular painting as pornography to which Jonathan takes great exception, and tries to convince his ungracious host that it is not pornography, but a painting with great social significance.  He even boasts that all his paintings at the current exhibition have already been sold, with a waiting list for future paintings. Nick is eminently unimpressed and a heated discussion ensues about what makes good art. Jonathan gives a long dissertation on the meaning of art and the difference between the artist’s intentions versus how the art is perceived and translated by the public.

There are several explosive scenes where Jonathan is being interviewed in the gallery by Grete, the German journalist who refers to him as a Jewish painter. He keeps correcting her by saying that he is an American painter and being a Jew has nothing to do with his art. With a nice smile on her face, barely veiling her own anti-Semitism, she attacks his work and questions why he hired a publicist.  Putting him on the defensive, he explains that he needs someone to coordinate his myriad commitments. Her goal was to anger him and indeed she succeeds.

So here we are so many years later. Pat is still in love with Jonathan. Her husband Nick despises the artist for the hurt he inflicted on his wife. With an incredibly surprising twist, Nick sees an early painting of his hanging on the wall and feels the purity of that painting will restore his original passion. What happens with that piece of art makes for interesting drama.

As far as production values, Adam Haas Hunter’s set design makes excellent use of the small space, which is augmented by Michael Gend’s light design, and David B. Marling’s sound design, which nicely accompanied the multiple set changes well executed by the cast.