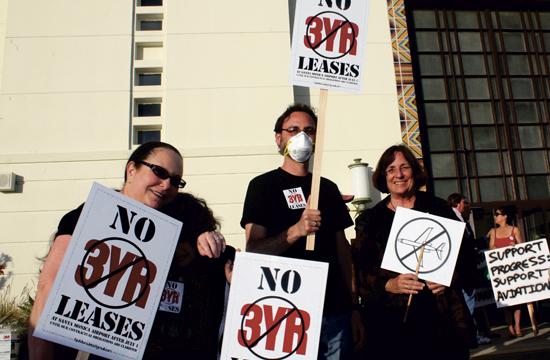 The passing of Measure LC at the November 2014 elections returns control of most of the airport to Santa Monica City on July 1, 2015, at the expiration of a 1984 agreement between the City and Federal Aviation Administration (FAA).

“We breathe jet-fumes, we get jet-blast, we have dirt and weeds that fly off the hill…I’m here to convince the City if they can’t operate an airport that is compatible with the surrounding community, then they need to close it,” said 53-year neighbor of SMO, Virginia Ernst.

Pro-aviation supporters also had their presence felt, opting to dominate Council chambers by filling most seats early in the evening.

“The airport is a huge benefit to the community, and the City’s own records show that,” said aviation supporter Gavin Stokes. “At the end of the day, the airport was here first and it serves a very useful function, and is part of our national transportation system.”

With Council chambers at capacity, extra security was called in as people spilled onto both the upper and lower levels of City Hall.

More than 130 people addressed City Council in what became a five-hour public hearing.

Representatives from Congressman Ted Lieu and Congresswoman Karen Bass called on the City to shut down aviation operations at SMO July 2015, offering to help Santa Monica take on the FAA in Washington. Los Angeles Councilman Mike Bonin (District 11) and his predecessor Bill Rosendahl, as well as a representative for Los Angeles Council Paul Koretz (District 5), also called for the airport’s closure.

Many armed with videos and PowerPoints, a cross-section of voices presented health concerns, small business and arts-funding concerns, transport and usage issues, and all sides of potential legal ramifications, to City Council.

After extensive debate, City Council unanimously agreed to pass a motion that includes; negotiating three-year leases up until June 30, 2018 at current market rates to selected master tenants located in SMO’s 1948 land parcel – these leases are to include a clause stating that there may not be airport operations up until June 30, 2018 (if the City gets legal clearance to close SMO prior to that date); eliminating the bulk of existing subleases; hiring a broker to negotiate new leases and a property manager to operate leases at the airport; directing staff to develop recreation uses in the non-aviation parcel within three years; implementing month-to-month leases for tenants in non-1948 parcels; implementing labor peace agreements at SMO; continuing to implement measures to reduce the impact of airport use; and continuing to receive community input on the use of the airport.

The result was welcome news for some, but disappointing for those who have been campaigning to shut down aviation at SMO come July.

“What happened last night will only slow and confuse the process,” said resident Alan Levenson, in a letter he penned to Mayor Kevin McKeown Wednesday. “It will allow aviation to dig in deeper, with leases they can contest. It will give the FAA stronger reason to not release the last two thousand feet of runway.”

Litigation is inevitable, no matter what decision was made at Council, according to Councilmembers Gleam Davis and Sue Himmelrich, both seasoned attorneys themselves.

The question is, how to maintain some stability throughout the process, Davis said during Council discussion. “Going on month-to-month leases is not going to close the airport any quicker,” she added.

City Council’s multi-faceted approach is rational, justifiable, and will make a difficult if not impossible target for aviation lobby litigation while moving things in the direction the community wants, according to John Fairweather, founder of Community Against Santa Monica Airport Traffic (CASMAT) and Chair of the “Yes on LC, No on D” campaign.

“City Council did as much as they possibly could to move the ball forward at this time,” he said. “I believe this approach will get us all where we want to be much faster and safer than others they might have taken.”

Aviation proponents feel good about what happened on Tuesday, according to Dave Shaby, Santa Monica Airport Association board member and pilot.

“We think this is a good sign for how the City is going to manage the airport during the next several years, while the various pending lawsuits play out in the courts,” he said.

As part of Tuesday night’s Council decision, 12 acres of land at SMO currently being used for aircraft “tie-downs” will be turned into parkland.

“This is the beginning,” said Neil Carrey, President of the Santa Monica Airport2Park Foundation. “One day people will look back on this night as the moment when a noisy, dangerous, polluting airport began to be transformed into the wonderful green place that the people of Santa Monica need and deserve.”

The new park will be the first tangible benefit of Measure LC, according to the foundation.

“We applaud the step taken by City Council to have staff start the planning process to create a park and playing fields on the 12 acres of non-aviation land at the airport,” Carrey said.

For SMO opponents, their fight is not over yet.

“Our next opportunity to defeat this radical new vision for a modern Santa Monica Jetport will be the City Council approval of a final lease provisions with Atlantic Aviation,” stated Jonathan Stein, Treasurer of Sunset Park Anti-Airport. “The Council vote will occur in May or June 2015.”

Aviation supports are not prepared to back away quietly either.

“We will also continue to share our message of how the airport and aviation benefit the community, and continue our work to make this airport the safest, quietest, and most environmentally responsible airport of its kind, anywhere,” Shaby said.