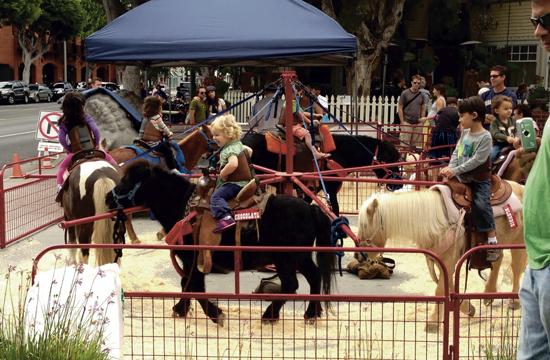 Attendees of the Santa Monica Farmers Market held every Sunday on Main Street took the opportunity to have their preferences heard during a recent survey organized by City staff Feb. 15.

Indicating a wish for more farmers and youth entertainment, a clear majority also voted to keep the ponies and petting zoo as part of the regular Sunday event.

The dot survey technique is a self-service research approach that asks a limited number of questions displayed on poster boards and easels in the market, according to City staff.

Visitors at the market were given three colorful, round, self-sticking dots and asked to indicate their preference to the three questions posed on the poster boards by placing one dot per question.

“The dot survey technique was well received by the customer base since it is a quick, simple, and fun way to encourage consumer participation and collect feedback,” City staff said.

“It is among the most popular techniques for gauging consumer behavior at farmers markets,” they added.

On Feb. 15, five boards were displayed in the center of the Main Street Farmers Market.

Board one provided background information and context.

Boards two to four posed the questions; “What would make this market better?”, “What would entice you to purchase more farm products at this market (vegetables, fruit, nuts, flowers, cheese, meats, eggs)?” and “Which educational activity would most motivate you to attend this Market?”

Board five provided a space for customers to leave any additional comments about the market.

Just over 200 open comments were received over the 4.5 hour period.

“More than half the open comments received were in favor of keeping the pony rides and petting farm,” City staff reported.

Owner and operator of Santa Monica Farmers’ Market attraction Tawni’s Ponies and Animal World Petting Zoo, Tawni Angel, said that the response to the survey was both telling and heartwarming.

“I think that it gave the customers at the farmers’ market a voice,” she said.

While there was not a dot survey board that included keeping the ponies as an option, a total 68 percent of all comments on entertainment pertained to the ponies and petting zoo.

The fact that people went out of their way to write a thought-out response in favor of the ponies says a lot, Angel added.

Council voted Sept. 9 last year to favor non-animal-related activity at Santa Monica’s Main Street Markets at the end of Angel’s contract in May. Angel has been at the market for 11 years.

“I have 250-300 customers every week wanting to know why I can’t stay, trying to get me to stay and asking where I’m going to go next so that they can come with me,” Angel said.

Angel said that she trusts that the City will take the survey into account.

“I would hope that the City Council would listen to their community,” she said.