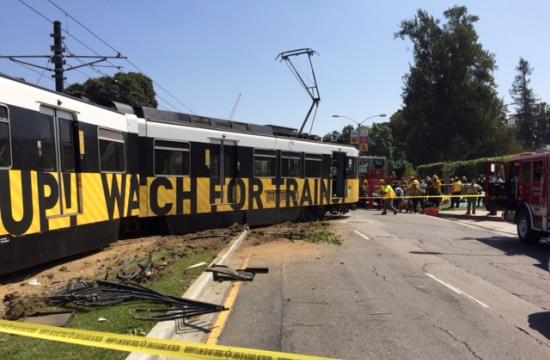 Expo Line trains resumed passing USC on Sunday, as a motorist remained hospitalized with injuries suffered when he drove a car driven into a train’s path.

There was still no indication if it was a signal failure, or a failure of the driver or the train operator, that caused the wreck. A total of 21 people were hurt to varying degrees in the crash between a three-car light rail train and a Hyundai Sonata, reportedly driven by a male USC student.

The crash was recorded by an on-board camera and the video was turned over to the Los Angeles Police Department’s South Traffic Division, which handling the investigation, Metro spokesman Jose Ubaldo said.

The driver’s name was not released by the LAPD, but a South Traffic Division sergeant told the Los Angeles Daily News that he is a 31-year-old man who attends the university. He was identified in an ABC7 report as film student Jacob Fadley.

He was reported to be in “grave” condition Saturday, a term used by paramedics to describe someone who is near death but could recover, but according to ABC7, he is now in stable condition.

The derailed train, wrapped with gigantic yellow and black “watch for train” signage, was placed back on the tracks late Saturday and run to a Metro service yard. Bus bridges ended early this morning and regular Expo Line service began as scheduled after 5 a.m. today, Ubaldo said.

“Everything is back to normal,” he said. “We’re just waiting for the results of the investigation.”

The train operator was Kenneth Goss, a 29-year Metro veteran who is in his mid-50s. At first he was hospitalized in serious condition, but was later released and was recuperating at home, according to Ubaldo.

Nineteen other people, all train passengers, suffered minor injuries in the 10:50 a.m. Saturday crash and eight of them were taken to hospitals, Lenske said.

The train hit the Hyundai at a traffic signal between USC and the Museum of Natural History. Both were heading east, when the car made a left turn toward the USC gate and was hit by the electric light rail vehicle.

Witnesses said after the Hyundai made the turn, it became wedged between a pole and the train, which derailed across both lanes of eastbound Exposition Boulevard next to the landmark Exposition Park rose garden.

Left turns such as that are regulated by a red or green left turn arrow, and there are flashing alarms for approaching trains, which are supposed to get “train stop” signals if cars are turning across the grade crossing.

The Metro Expo line was opened in 2012, and it runs along city streets for nearly its entire length from downtown Los Angeles to Culver City. It is now being extended to Santa Monica, also primarily along city streets and with overpasses only at a few crossings.

Its street crossings have long been a contention at USC. Civil engineering professor Najmedin Meshkati had issued warnings about these types of crashes in a study he wrote several years ago.

He told the USC Daily Trojan Saturday that the grade crossings deserve new study by Metro and the California Public Utilities Commission.